Shedding new light on Hispanic Heritage attempts to delve into some aspects of the Hispanic influence spanning from the time of exploration through the 20th century, and explore future collaborations in the field of heritage protection. In order to promote awareness on America’s rich Hispanic history and culture, Carrie Gibson will engage in conversation with Anthea Hartig, Director of the Smithsonian’s National Museum of American History about her latest book. 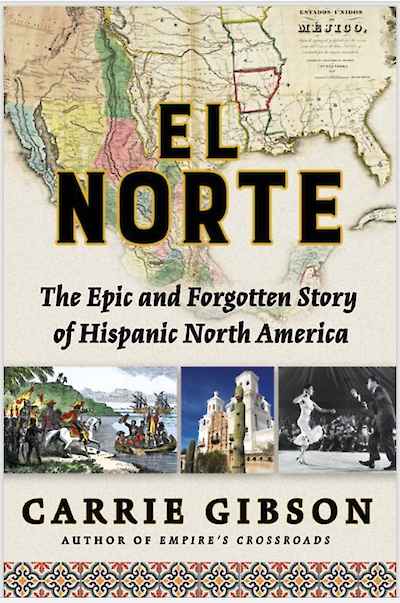 Because of our shared English language, as well as the celebrated origin tales of the Mayflower and the rebellion of the British colonies, the United States has prized its Anglo heritage above all others. However, the nation has much older Spanish roots –ones that have long been unacknowledged or marginalized. The Hispanic past of the United States predates the arrival of the Pilgrims by a century, and has been every bit as important in shaping the nation as it exists today.

El Norte: The Epic and Forgotten Story of Hispanic North America chronicles the sweeping and dramatic history of Hispanic North America from the arrival of the Spanish in the early sixteenth century to the present –from Ponce de Léon’s initial landing in Florida in 1513 to Spanish control of the vast Louisiana territory in 1762 to the Mexican-American War in 1846 and up to the more recent tragedy of post-hurricane Puerto Rico and the ongoing border acrimony with Mexico. Interwoven in this stirring narrative of events and people are cultural issues that have been there from the start but which are unresolved to this day: language, belonging, community, race, and nationality. Seeing them play out over centuries provides vital perspective at a time when it is urgently needed.

Carrie Gibson is a U.S.-born, U.K.-based historian and journalist. She received her Ph.D. from Cambridge in 2011, and her thesis focused on the Hispanic Caribbean in the era of the Haitian Revolution. She is the author of the 2014 book Empire’s Crossroads: A History of the Caribbean from Columbus to the Present Day.

Her second book, El Norte: The Epic and Forgotten Story of Hispanic North America, was published in 2019. She has spent years travelling and researching in the Caribbean, Latin America, and the United States. Before embarking on a career as a historian, Gibson was a journalist for The Guardian and Observer, and continues to contribute to media outlets, including the BBC. She lives in London.

Anthea M. Hartig is the Elizabeth MacMillan Director of the Smithsonian’s National Museum of American History and the first woman to hold the position since the museum opened in 1964. Hartig oversees 257 employees, a budget of more than $40 million and a collection that includes 1.8 million objects and more than 3 shelf-miles of archives. She officially began her tenure Feb. 18, 2019.

An award-winning public historian and cultural heritage expert, Hartig is dedicated to making the nation’s richly diverse history accessible and relevant. A third-generation native of Southern California, she grew up in the greater Pomona Valley. Before joining the Smithsonian, she served as the executive director and CEO of the California Historical Society (CHS) in San Francisco. During her tenure, Hartig reinvigorated the organization by raising over $20 million to quadruple the CHS’ annual budget. Under her leadership, CHS doubled its staff, created over 30 exhibitions, created its digital library and created the Teaching California initiative, a free online history portal for K–12 students that brings the archive into the classroom. She also served as the director of the Western Region for the National Trust for Historic Preservation from 2005 to 2011, and has been involved in historic preservation and public history projects since the 1990s. She earned her doctorate and master’s degrees in history at the University of California, Riverside, her bachelor’s degree at the University of California, Los Angeles and studied as an undergraduate and graduate student at the College of William and Mary.

The evening will conclude with a reception party offered by the Cultural Office of the Spanish Embassy.