The Former Residence of the Ambassadors of Spain hosts the fifth edition of “Not Your Regular Wall” with Spanish muralist Lula Goce as a guest of honor for the hall intervention.

Not Your Regular Wall was born in 2018 with the purpose of giving Spanish artists the opportunity to intervene the hall of the Former Residence of the Ambassadors of Spain in Washington, D.C.

In 2022, the fifth edition of the project invites the renowned Spanish urban artist Lula Goce and her artistic proposal Ode to Dune Plants to imprint the walls of the building. 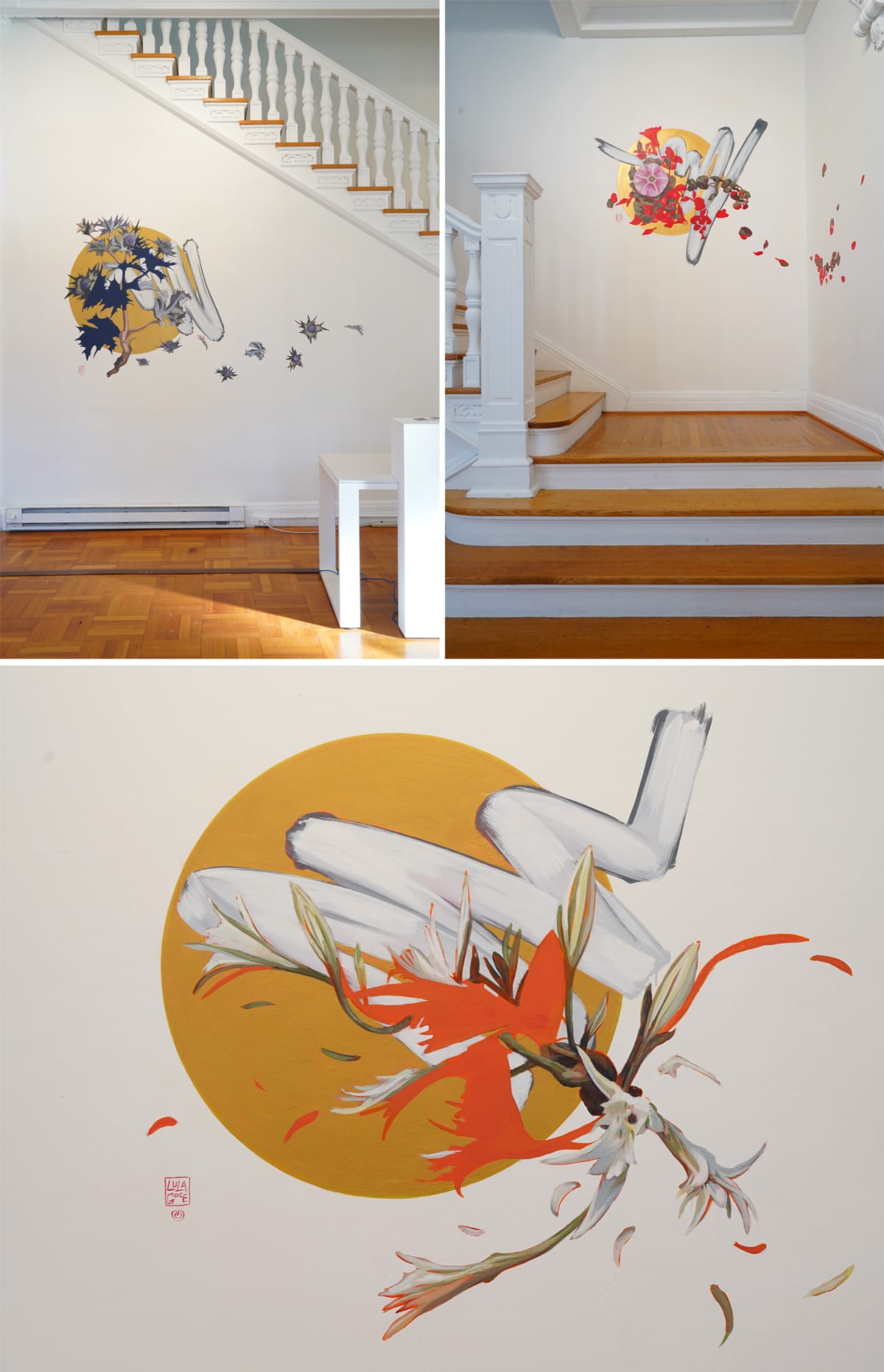 I live on the beach, the dunes, and the tides. Under leaden skies, long walks accompany my mornings, pushed by the north winds, saltpeter, and tidal waves.

Dune plants populate the inhospitable. From the accumulated sand grow tons of species with specific habitats and characteristics. Threatened by human intervention, they struggle to maintain their imprint on Nature.

The plants retain and stabilize the sand of the dune. The nutrients from the algae that wash up on the shore fertilize this vegetation, and the animal communities pollinate and disseminate it. In exchange, they receive food and shelter. All this process gives rise to one of the most beautiful ecosystems in Galicia, whose biodiversity makes up the coastal dunes.

We live in a unique historical moment, where globalization and the ease with which we travel and go across long distances generate a constant change in Nature, often irreparable. Homo Sapiens have transformed the landscape and ecosystems for thousands of years. First, they extinguished entire chains of animals as hunter-gatherers. And that increased with the vegetation from the Agricultural Revolution with the transformation of large spaces into cultivated fields.

With evolution, the human being has caused the reduction and disappearance of a large number of species, both animal and plant, totally transforming the landscapes. In genetic terms, we have seen ecosystems drastically reduced to a few dominant species —such as wheat— or animals —such as cows, goats, sheep, and chickens.

This mural intervention is an ode to dune plants, a reminder of their existence to the extreme of an artistic model. It sacralizes and sanctifies them in a pictorial language reminiscent of Judeo-Christian representation and sacred art.

The contrast between realistic representation and flat spot speaks of this dissolution in time and subsequent dissolution. At the end remains a shadow, a visual register of the reality it was.

The cover of our 2023 Cultural Program for the U.S. has also been designed by Lula Goce: 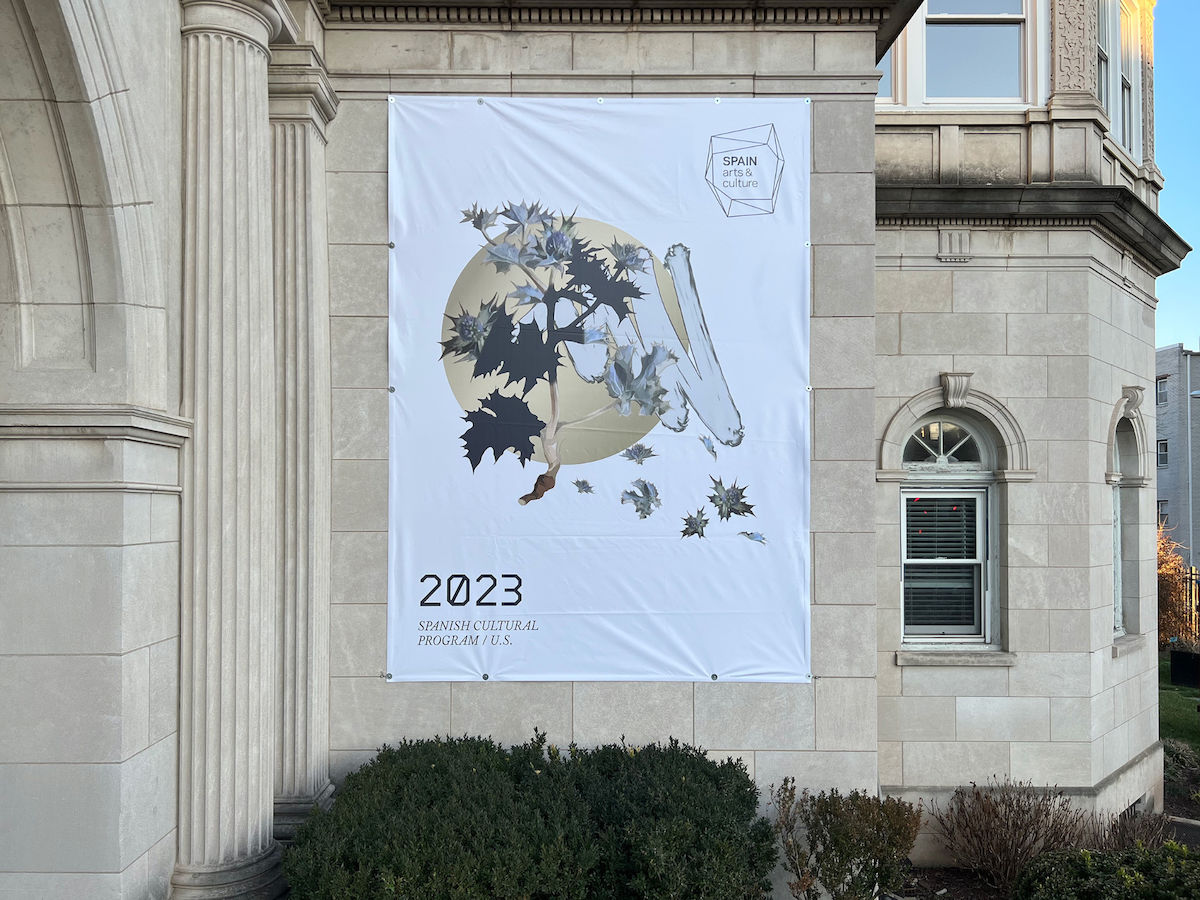 Lula Goce was born in Galicia, Spain. She grew up influenced by the salty coastal air, barnacles, drizzle and the beautiful beaches this region of Spain is famous for. At 20 she moved away to Salamanca and graduated in Fine Arts specializing in painting. She took part in competitions and scholarships with an emphasis on ephemeral sculptures as well as paintings, both in public spaces, museums and galleries. During this period she discovered the thrill of transplanting her work from the gallery environment onto walls, bringing a fresh perspective to a structured graffiti scene, leaving iconic pieces on street walls and abandoned buildings.

Goce then moved to Barcelona where she studied a PhD as well as a Master in artistic creation at The Fine Art University of Barcelona, graphic design at The Pauta Formacio and Illustration at The Escola de la Dona. Barcelona turned out to have a vibrant and thriving underground graffiti scene. Goce became part of art collectives developed in old factories like Hangar, Caminal or La Escocesa in Poblenou. There she met and became a member of the Raw Street art collective and proceeded to develop her technique on the streets and walls of Barcelona.

Goce relished the direct interaction with the spectator that happens when committing a huge street piece to a wall. A dialogue is established between passers-by and residents alike as the piece takes shape; when it’s finished, she felt it altered community spaces and neighborhoods for the better.

Lula Goce has participated in numerous urban art festivals around the world such as the Grenoble Street Art Festival, 501 SeeStreet in NYC, North West Walls, Waterford Walls in Ireland, Memorie Urbane in Italy, Zona Maco in Mexico, Street Art Summer in Hannover, Nasimi Festival in Azerbaijan, Poliniza//Dos in Valencia, Twenty Urban Art in Murcia, Mad Cool Festival in Madrid, Bac in Barcelona. She have also participated in projects in art centers such as the Casa de las Conchas in Salamanca, the Santa Mónica Arts Centre and the CCCB in Barcelona, Matadero in Madrid, MARCO in Monterrey (Mexico), Diego Rivera Museum in Guanajuato (México); and exhibitions in DDR projects Gallery in Long Beach, CA, Inoperable Gallery in Viena, Next Street Gallery in Paris and Street Art Place in Italy.

Free. Open during scheduled events, and by appointment. Book your visit from Monday to Friday (except holidays and special events days), from 10 am to 3 pm, at [email protected]