Not Only What, But Also How

“Not Only What, But Also How” offers a review of each of the 17 Sustainable Development Goals conducted by Spanish artists and organizations that will provide the opportunity to take a closer look at the 2030 Agenda.

Signed in September 2015 at the 70th United Nations General Assembly, the 2030 Agenda outlines 17 Sustainable Development Goals agreed to by 193 Heads of State or Government from all over the world. This plan provides a new road map for the fight against poverty and inequality, integrating three specific fronts of action – economic, social and environmental.

For that purpose, the agenda sets out 17 key points with 169 targets which can be measured through 230 verifiable indicators. The points agreed upon are beyond dispute in the way they are presented. However, if we analyze the ideas and main action lines, some questions and doubts emerge about their depth and feasibility, as well as about the genuine commitment of all the signatories.

These concerns repeat a historical debt reflected in the lack of implementation of the international development agreements that have been promoted during this millennium, such as the successive Official Development Assistance targets, IMF reform or the Copenhagen Climate Change Summit. Although each time progress has been made in terms of greater monitoring, transparency and organization of data, actions and dedicated resources, there is still considerable heterogeneity in the measures adopted by each country, such as in matters of gender equality or CO2 emissions*. This is due mainly to the fact that ultimately it is up to each nation to decide and the responsibility acquired is managed in a sovereign manner by each state.

As a number of contradictions and potential questions derived from colonial and neoliberal notions start to arise, every community is faced with the responsibility of reviewing and monitoring the initiatives undertaken together with the institutions that carry them out.

If we stop for a minute and think about what is meant by development and progress, it is quite hard not to question who really decides the cultural meaning of these terms. There is a historical hegemony of the so-called Western countries over this supposed state of happiness, an error calculation of what cooperation truly means, taking for granted that they know more without making room for the knowledge and traditions of the Global South.

If we use the term growth to refer to material wealth, the generation of economic returns, or the value of people and societies as human capital, then we cannot help but to take a look at a genealogy where it seems that development may be an end in itself, or where priority seems to be given to promoting consumption to maintain said development… even when we add the qualifier “sustainable,” which broadens the actions that need to be carried out to care for the planet and all the beings that inhabit it. All this needs to be considered as whole; even when “cultural development” is not part of the conversation in parallel terms, as one of the key points that need to be addressed.

Not Only What, But Also How takes a critical approach, from an artistic point of view, to the 2030 Agenda offering a review of each of the 17 goals conducted by artists and organizations of the Spanish State: Núria Güell, Lorenzo Sandoval, Amanda Moreno, Fermín Jiménez Landa, Andrea Muniáin, Instituto de Estudios Postnaturales (the Institute for Postnatural Studies), Enrique Radigales, Cristina Garrido, MONTAJE, Nicolás Combarro, Irene de Andrés, and Alán Carrasco (artists confirmed up until September 2022.) They will provide us with the opportunity to take a closer look at one of the most preponderant international campaigns of this decade by making use of strategies of appropriation, absurdity, irony, documentation, design, changes in perspective, creation of new landscapes, and more.

A new font was specifically created for the design and image of the project developed by Jaime del Corro, based on the use of pictographs and dynamics of situation that refer to the concept of severe error, while also seeking to emphasize the urgent need to react to the objectives and review them, beyond the creation of idealistic lists.

One of the basic points included in the 2030 Agenda is environmental sustainability, which is why the materials used for displaying the works were inks free of volatile organic compounds (VOC) and PVC-free certified substrates with lower environmental impact, in accordance with Green Print practices for a more eco-friendly printing.

The title Not Only What, But Also How aims to highlight questions about some of the items included in the 2030 Agenda and ways of activating said agenda: a reflection on what and how things are done, far beyond an initial exposition in a politically correct or white-washed manner. “People not only care about outcomes, they also value the procedures which lead to the outcomes,” an idea that is further developed in the research carried out on procedural utility theories applied to sociology and economics.

The small punctuation mark (,) in the middle of this sentence refers to the grammatical use of the comma. This punctuation mark is used to separate elements within a sentence, to enclose non-essential information or clarify an idea, to indicate that some words have been omitted, etc.; it normally indicates a brief pause within a sentence. That small inkblot can change its whole meaning.

Thus, for the next seventeen months, each of the large posters designed by the participating artists will successively be displayed on the marquee set up in front of the headquarters of the Cultural Office of the Spanish Embassy in Washington; a place of pause, of clarification, of projections which may point out omissions or change meanings. 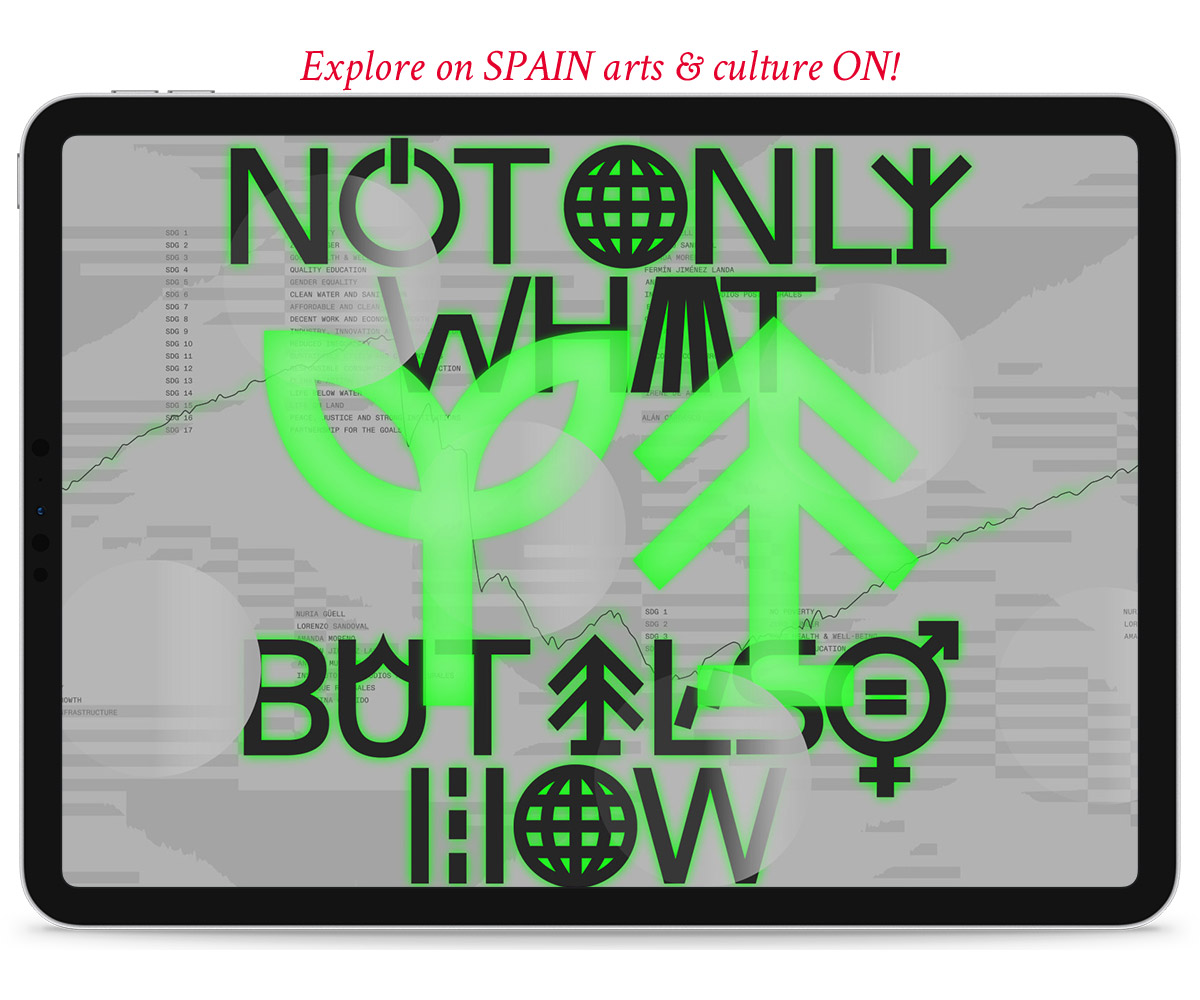 Each month Not Only What, But Also How will present an artistic proposal by the following artists (confirmed as of September 2022):

Not Only What, But Also How

Presented by the Cultural Office of the Embassy of Spain in Washington, D.C. and curated by Marta Ramos-Yzquierdo. Image by Jaime del Corro. * Frey, Bruno S., Benz, Matthias and Stutzer, Alois, “Introducing Procedural Utility: Not Only What, but Also How Matters.” Journal of Institutional and Theoretical Economics (JITE) / Zeitschrift Für Die Gesamte Staatswissenschaft 160, no. 3 (2004): 377–401.