Digital Trauma (and the Crystal Image) at DCIFF

Directed by María Molina, the short movie “Digital Trauma (and the Crystal Image)” will be screened at the 2018 edition of DC Independent Film Festival.

As the oldest independent film festival in Washington, the DC Independent Film Festival has been showcasing cutting-edge features, shorts and documentaries since 1999. By exhibiting world premiere screenings, hosting timely seminars and workshops, and sponsoring discussions with the United States Congress, DCIFF gives independent filmmakers opportunities for their voices to be heard in a way that no other festival can provide.

The 2018 edition will include the Spanish short Digital Trauma (and the Crystal Image) among other 17 international shorts in the Animation Shorts Program.

Digital Trauma (and the Crystal Image) 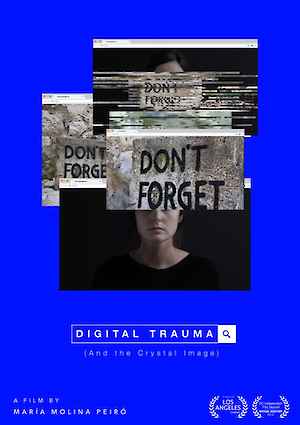 If we can access our past at any given moment, to what extent can we get rid of it and look ahead? What consequences do the access to a digital memory (including access to the words, images and sounds of the horrors of the past) have for post-conflict societies? Can a digital memory become a powerful tool to ignite more profound ethnic hate, violence and war?
The Crystal Image (Deleuze) describes a moment where a past image becomes fused or confused with its presentness. In the film, post-production is used as a conceptual tool to “traumatice” the Digital Image itself by using the slit scan technique. This effect creates images of time-based phenomena by merging different layers of time within a single image. In the film the present becomes more distorted in time as the stream of images goes on. The result is a liquid time, where the girl´s image becomes fused with the stream of images from the Google search box.