The fourth edition of “Not Your Regular Wall” hosts Spanish Illustrator Adolfo Serra as a guest of honor this year, on the 10th Anniversary of SPAIN arts & culture.

Not Your Regular Wall was born in 2018 with the purpose of giving Spanish artists the opportunity to intervene the hall of the Former Residence of the Ambassadors of Spain in Washington, DC. In 2022, Not Your Regular Wall comes back to the interior of the building with Adolfo Serra’s artistic proposal. 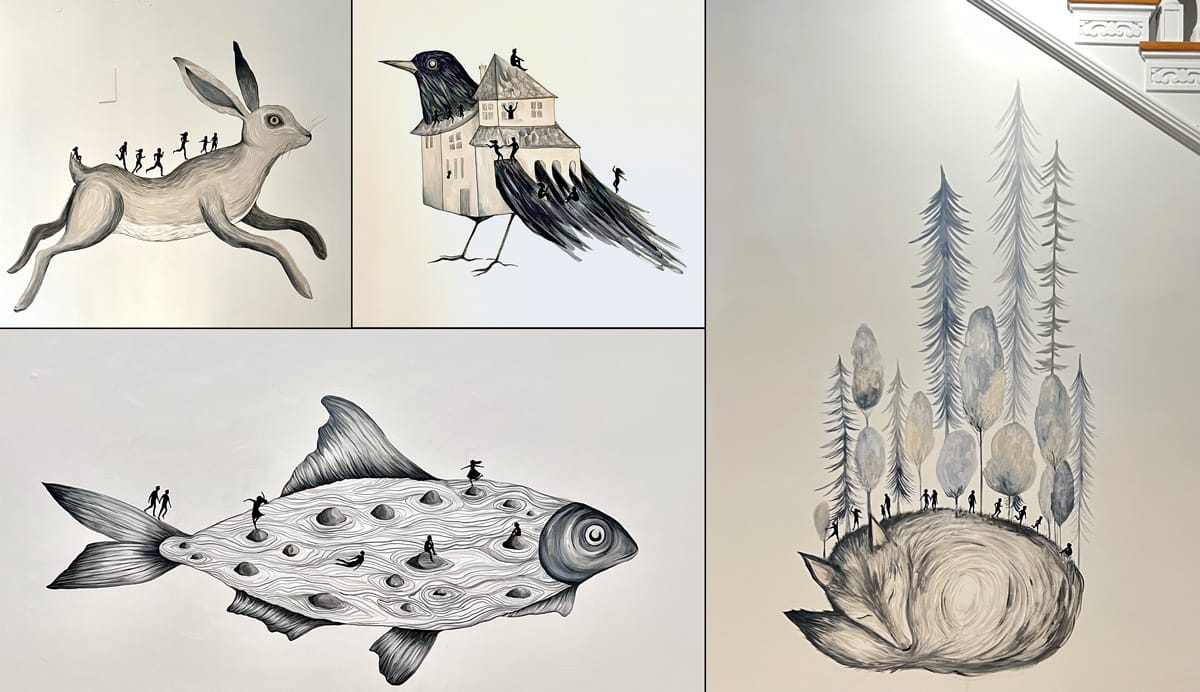 When SPAIN arts & culture invited me to participate in Not your Regular Wall, the theme was Celebration. It is true that due to the current situation the dates were moved and the possibility of intervening the walls of the Old Spanish Ambassador’s Residence seemed more diffuse and complicated. This idea was going around in my head. If the pandemic has taught us anything, it is that we must support art, literature, film, dance, music. Because in complicated times it is precisely what saves us, what we return to and what makes us dream, travel, imagine other realities. Little by little the situation became normal and I was able to travel to Washington, D.C. to illustrate the walls of the Cultural Center of the Spanish Embassy in Washington, D.C. This meant not only painting or creating but also travelling again, reconnecting, becoming a community again, getting to know the people behind the centre and the artists who have participated throughout this time and also travelling physically, visiting other spaces, cities, places. To connect with space and with nature.

With all this in my head, sketches and ideas emerged. To celebrate life, the spaces that we conquer and inhabit again, but also to celebrate community, connection and the sharing of ideas, thoughts, culture. A forest fox that sleeps and human beings play, dance, celebrate this return to nature. A house bird that reflects that we are a community, that we share and grow together. A rabbit that moves, travels and beings that move… Little by little the walls were filled with these poetic ideas.

A celebration. Celebrating life, the environment, the community, nature, water, forests, relationships, between us and with everything around us, playing with animal figures and the human beings that inhabit them and celebrating the world that we are recovering and that we must take care of together.

Adolfo Serra studied advertising and public relations, but soon returned to his childhood’s passion: drawing, taking up pencils and watercolors at the Escuela de Arte 10 in Madrid. Since then, his table has been filled with colors, papers and textures. For Serra, illustrating is deciding, telling, observing…

In 2020, the book Memory of the Snow by Julio Llamazares and Adolfo Serra, published by Nórdica Libros won the First Prize for the Best Edited Book 2020 granted by the Ministry of Culture of Spain. Part of Serra’s professional activity is dedicated to the development of workshops and laboratories related to illustrating and drawing, both for children and adults.