Elcano & Magellan: The First Voyage Around the World

On the occasion of the 500th anniversary of the first circunnavigation of the globe, the Spanish kid’s movie “Elcano & Magellan: The First Voyage Around the World” will be screened virtually this October as part of the 2021 “Kids Euro Festival”.

Elcano & Magellan: The First Voyage Around the World 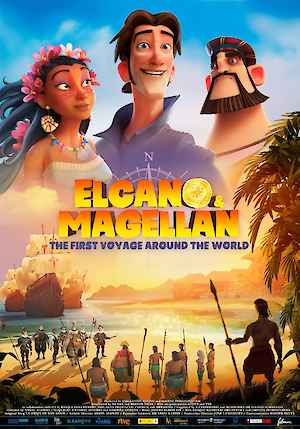 Anchors away! Hoist the sails! It’s time to embark on one of the most thrilling adventures of all time – the first ever circumnavigation of the globe in human history! A trip that ended in the same place it began, but after which nothing would ever be the same again. This is the story of the brave seafarers who grabbed the helm of history and changed its course forever. A journey which, as many people know, was started by Magellan, but that not so many know was concluded by Juan Sebastian Elcano, the real protagonist of the story.

What motivated these sailors to undertake such a potentially perilous voyage? Their desire to reach the Maluku Islands, an Indonesian archipelago and faraway paradise filled with spices and aromatic plants. But how would they get there if the only known route was the sole privilege of the Kingdom of Portugal? Well, the answer is simple; by sailing in the other direction! What was laying in wait for these courageous men however, was much more challenging: storms, hunger, hostile tribes and all kinds of incredible trials and tribulations would hinder the progress of our intrepid voyagers.

Five ships set sail from Seville in 1519. Three years later, only one of them managed to return, bringing their adventure full circle and finally proving that the Earth was round.

Now in its 14th year, Kids Euro Festival is one of the largest performing arts festivals for children in America, bringing some of Europe’s most talented children’s entertainers to the nation’s capital –and across America– physically and virtually. With in-person and online programs both for the general public and for school groups, more than 10,000 U.S. children and their families enjoy Kids Euro Festival programs each year.

Due to COVID-19, minimal in-person events will be held in this year’s festival in order to maintain the safety of our performers and audiences. These will take the form of two Family Days and a museum exhibit for DC-area residents, while national audiences can access all online activities from October 9-30. Meanwhile, a handful of D.C.-area classrooms will be hosting virtual visits from E.U. performers and artists to learn more about European culture, history, language and more.

Presented by the Cultural Office of the Embassy of Spain in Washington, D.C. in collaboration with the Delegation of the European Union to the United States

There is no other event programmed in Kids.