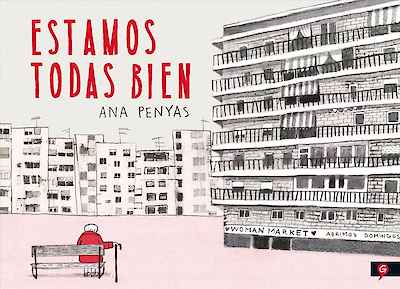 Through the memories of her grandmothers, Ana Penyas, winner of Spain’s 2018 National Comic Award, offers an intimate glance into the lives of two women under Francoism and the first decades of Spanish democracy, and explores the experience of an entire generation of women whose lives have hardly been told. Mixing past and present, Estamos todas bien illustrates with photographs, collage and graphic illustration, the everyday life of the period with a decidedly feminist vision. Penyas’ other work includes En Transición (2017).

When I told my grandmother Maruja that I was going to make a comic based on her life, she replied that I would better write a love story. When I said the same to my grandmother Herminia, she was very happy and said “yes, of course, baby.” So, recorder in hand, I went to see my grandmother Maruja so she could explain to me, for example, what that picture of flowers was hiding and the reason for her obsession with the kitchen. Then I visited my grandmother Herminia and discovered the importance of her grandmother Hermenegilda and that peculiar bohemian air of her. The women of her generation, who we don’t usually care for as they took care of us, have always been secondary characters of other lives: the wife of, the mother of, or the grandmother of. Like Maruja and Herminia. Their anecdotes, their ideas and their world are here, in this book, a small tribute that wants to make them protagonists.

Penyas was born in Valencia (Spain), in 1987. She has a degree in Industrial Design and a degree in Fine Arts from the Polytechnic University of Valencia. She was selected to perform an artistic residence in De Licerias (Porto, 2015). She received a special mention in Ibero-America Ilustra 2015 and won the VII Ibero-American Illustrate Catalog in 2016. In 2017 she received the Fnac-Salamandra Graphic International Graphic Novel Prize thanks to which she published her first graphic novel Estamos todas bien. In 2018 she was awarded the prize of national author revelation of the Barcelona Comic Show and with the National Comic Award for Estamos todas bien.