Salvador Dalí, guest of honor at the Detroit Institute of Arts

The two works by Salvador Dalí –Remorse, or Sphinx Embedded in the Sand, 1931 and The Transparent Simulacrum of the Feigned Image, 1938– and another one by Frida Kahlo (Self-Portrait with Monkey, 1938), are on display at Detroit Institute of Arts, accompanied by photographic portraits of the two artists and located adjacent to Diego Rivera’s Detroit Industry murals (1932–33). The exhibition explores how the two iconic artists produced their own forms of expression –Kahlo’s contribution to female self-portraiture and Dalí’s engagement with illusionistic image– creating surrealist worlds of subjectivity, myth, dream, mirage and magic.

Remorse, or Sphinx Embedded in the Sand 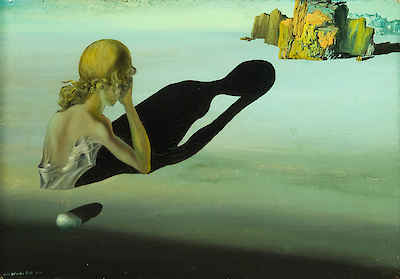 The Sphinx, a prominent mythological figure in Egyptian, Asian, and Greek mythology, combines the body of a lion, the tail of a serpent, the wings of an eagle and the head of a women. In this painting, however, it is endowed with –according to Dalí’s autobiography– only two of his “most active fetishes”: a shoe and a glass of warm milk. The long shadow cast by the Sphinx leads the eye to cliffs that look very similar to those found on Cap de Norfeu near Cadaqués, Spain, where Dalí spent his childhood summers. It is signed “Olive Salvador Dali” in affection for his new love Gala, whom he occasionally nicknamed “Olive” on account of her skin color.

The Transparent Simulacrum of the Feigned Image 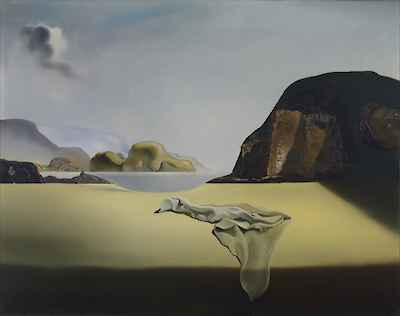 The Surrealist movement highlighted the importance of the subconscious and the imagination. In the early 1930’s Dalí pioneered what he called the “paranoic-critical method” of painting, a way of making irrational images from the dreams to look real. The title of this painting is almost a warning against trying to rationally explain its imagery: “The Transparent (see-through) Simulacrum (a semblance of something) of the Feigned (not real) Image (a reproduction of something or a picture in the mind).” The table, on which rests a napkin and a bowl of food, can also be seen as a landscape in which the bowl becomes a bay and the contents appear to be distant mountains. The head floating on the right side is that of Gala, his inspirational muse. It is also signed with both of their names.

The DIA will reopen to members and tri-county residents on July 10, and to all visitors on July 15.

Presented by Detroit Institute of Arts, in collaboration with Albright-Knox Art Gallery and Eli and Edythe Broad Art Museum at Michigan State University. Photo: Remorse, or Sphinx Embedded in the Sand, 1931 by Salvador Dalí.