Three emerging Spanish playwrights create new short plays on the occasion of the 5th Centenary of the first trip around the world.

In 1519, a Spanish expedition led by Portuguese Ferdinand Magellan set course to find a western route to the once called East Indies (Southeast Asia and parts of East Asia) and reach the Maluku Islands, named the Spice Islands at that time because of the spices (nutmeg, mace, and cloves) that were exclusively found there.

After the death of Magellan during the course of the trip, Spanish explorer Juan Sebastián Elcano led the expedition to the Spice Islands, and ultimately across the Indian Ocean and up the Atlantic ocean back to Spain, resulting in the first circumnavigation of the world in 1522.

Commissioned and produced by the Cultural Office of the Embassy of Spain, directed by Ignacio García-Bustelo (Artistic Director of AENY – Spanish Artists in New York) and performed by Luz Nicolás, María Peiramaure and Megan Graves, Teatro para dar la vuelta al mundo is a theater proposal that celebrates the comeback of the performing arts to a live setting and away from computer screens, connecting with the audience through stories that explore the meaning of “journey,” and examine the particular challenges of our brave new world. All through the eyes of three female playwrights and an all-female cast.

Teatro para dar la vuelta al mundo will take place at the Former Residence of the Spanish Ambassadors in Washington, D.C., on the following days:

The duel by Almudena Ramírez-Pantanella

Two academics confront their differing views on how to approach historical events. “She” advocates a comical approach, while “He’” prefers serious argument, supported by expert testimony. Through their disagreement, we bear witness to the relationship problems this couple is experiencing. A park in an oneiric setting becomes the backdrop for a monumental argument between the two, and the place where a mysterious sailor from another time, a sailor who knows first-hand the secrets of the earth, takes up the conversation.

Landsickness happens after a long time at sea. Once you get used to the rocking motion of the sea and come ashore, there is a mismatch between the desired movement and the absence of it, resulting in seasickness and disorientation. Three gamers find themselves in a virtual ocean in the early hours of the morning when a bug changes the rules of the game: the sea is widening. Chris –not a rat-boy– does her best to convince John and Joachim that she is the one to lead this expedition if they want to win the game. But, like the sea, the world of videogames is a hostile place for us women. This is the purpose of Landsick, to explore the universe of circumnavigation through the lens of videogames and a gender perspective.

In early 2020, Emma has been commissioned to write the manifesto to commemorate the 500th anniversary of the first circumnavigation. In the midst of the preparations, the COVID-19 crisis arrives. How can we talk about going around the world when the only thing that can be done is around the block? One day, she discovers Daniel, a biotechnologist and paranoid about a possible end of the world, who has devised an invention to preserve seeds of all possible species. Through contact with Daniel, Emma discovers that circumnavigating is nothing more than navigating a circumference, and that to know the measure of the world, perhaps one must first know the measure of oneself, in her case, forgotten. 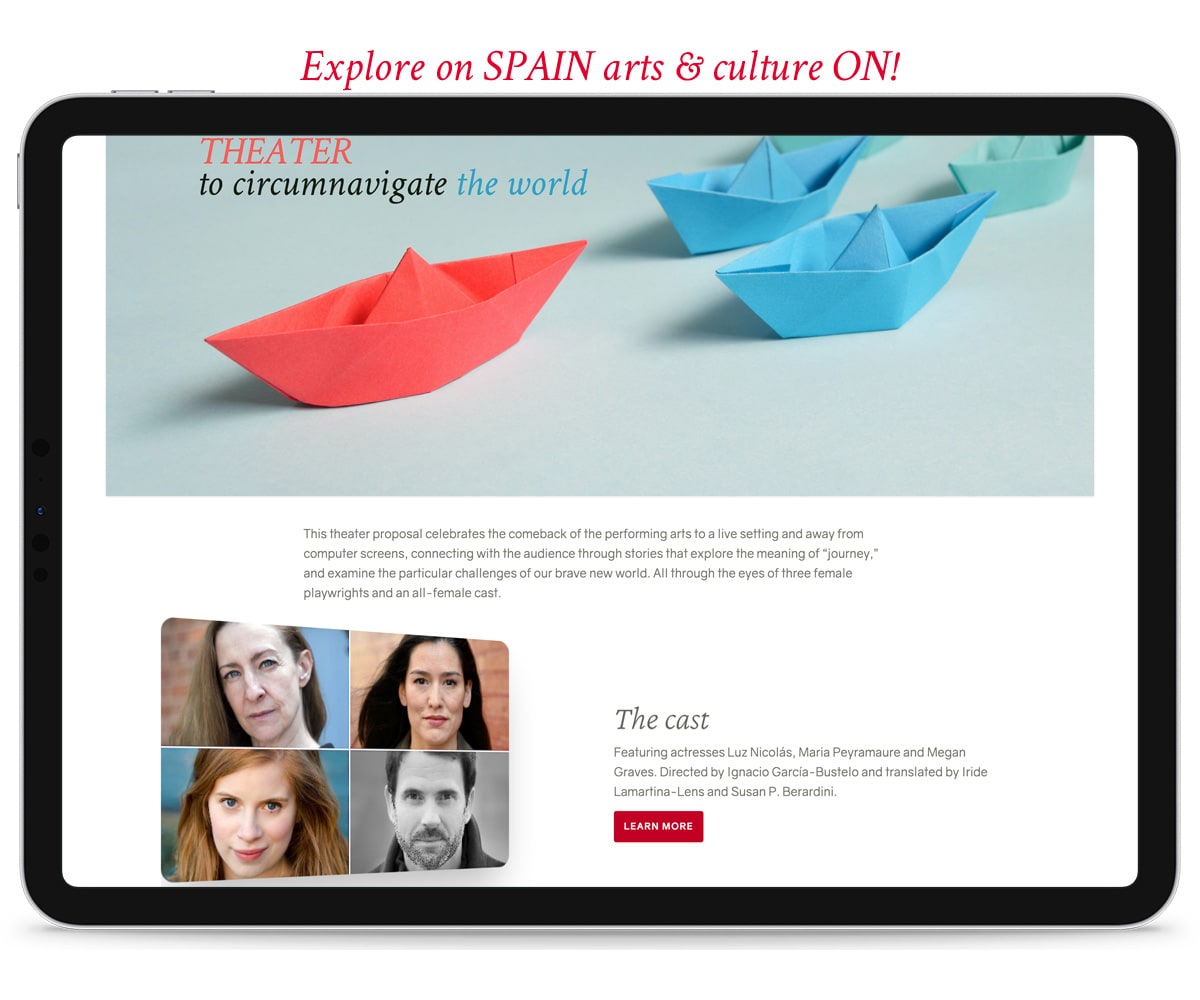 In addition to the performances at the Former Residence of the Ambassadors of Spain in Washington, D.C, on June 16, 17 and 18 at 7 pm, the plays will be represented in different public locations of Washington, D.C., on Saturday, June 19 and Sunday June 20. Stay tuned for more information about the locations on our social networks and newsletter.

Theater to circumnavigate the world

Presented by the Cultural Office of the Embassy of Spain in Washington, D.C. Image by Miguel A. Padriñan