The Spanish Craze by Richard Kagan

Professor Richard L. Kagan presents his new book, followed by a conversation with Suzanne Schadl, chief of the Hispanic Division of the Library of Congress. 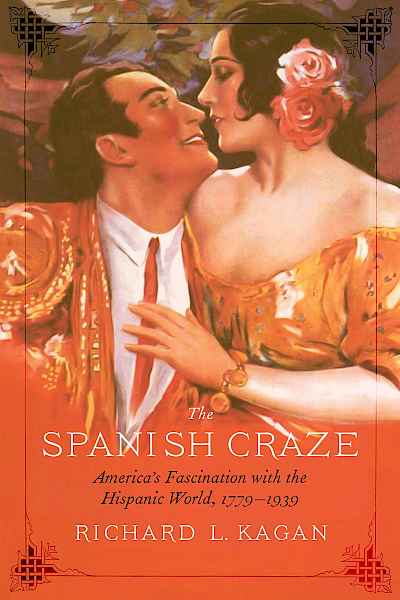 The Spanish Craze is the compelling story of the centuries-long fascination with the history, literature, art, culture, and architecture of Spain in the United States. Richard L. Kagan offers a revisionist understanding of the origins of hispanidad in America, tracing its origins from the Early Republic to the New Deal.

As Spanish power and influence waned in the Atlantic World by the eighteenth century, Spain’s rivals created the “Black Legend” that promoted an image of Spain as a dead and lost civilization rife with innate cruelty and cultural and religious backwardness. The Black Legend and its ambivalences influenced Americans throughout the nineteenth century, reaching a high pitch in the Spanish-American War of 1898. However, the Black Legend retreated soon thereafter, and Spanish culture and heritage became attractive to Americans for its perceived authenticity and anti-modernism.

Author of numerous books and articles, his books include Lucrecia’s Dreams: Politics and Prophecy in Sixteenth Century Spain; Urban Images of the Hispanic World, 1493-1793; Inquisitorial Inquiries: Brief Lives of Secret Jews and other Heretics; Atlantic Diasporas: Jews, Conversos, and Crypto Jews in the Age of Mercantilism; Clio and the Crown: The Politics of History in Medieval and Early Modern Spain, and most recently, The Spanish Craze: America’s Fascination with the Arts and Cultures of the Hispanic World, 1779-1939. He is currently at work on a new book centered on Henry Charles Lea, the 19th-Century Philadelphia publisher and historian credited with writing the first “scientific” history of the Spanish Inquisition.

With more than 16 years of teaching and library experience, Suzanne Schadl is chief of the Hispanic Division of the Library of Congress and an academic expert in Latin American studies.

Schadl was curator of the Latin American collections at the University of New Mexico (2008-2018), where she managed Latin American, Iberian and U.S. Latino acquisitions, related library instruction and community outreach. Prior to this work, Schadl was director of the Gerald and Betty Ford Library at The Bosque School, assistant professor of history at Roanoke College and lecturer in history at the University of Texas in Austin. Schadl’s interest in communication networks led her from historical research on obstetric and naturalist publications in 19th century Brazil to grant-funded library projects. These range from capturing Latin American tweets and translating electronic metadata to engaging diverse communities from the United States and Mexico with print, visual and tactile sources in Spanish, English and Indigenous languages.

Schadl holds a doctorate in Latin American Studies from the University of New Mexico. She is active in the Seminar on the Acquisition of Latin American Library Materials, serving most recently as president. Also notable is her board participation at the National Hispanic Cultural Center (2014-2018) and the New Mexico Humanities Council (2016-2018).

Schadl’s collaborative publications include two books, Scholarship in the Sandbox: Academic Libraries as Laboratories, Forums and Archives for Student Work (forthcoming) and Getting Up for the People: The Visual Revolution of ASAR-Oaxaca (2014). She has also published articles in several journals on community engagement, including “Tomes! Enhancing Community and Embracing Diversity Through Book Arts” (forthcoming); “Uncommons: Transforming Dusty Reading Rooms into Artefactual,” “Third Space’ Library Learning Labs” (2015); “Cite Globally, Analyze Locally: Citation Analysis from a Local Latin American Studies Perspective” (2015) and “Reference as Outreach: Meeting Users Where They Are (2011).”