SPAIN arts & culture, in collaboration with the Embassy of Argentina, presents the film “Sidewalls,” a comedy drama which examines with charm how the architecture of a city conditions the lives of two of its residents.

This program is presented as part of AIA/DC Architecture Month, which features EXPORT: Spanish Architecture Abroad and ALTERNATIVAS/ALTERNATIVES: The Thirteenth Spanish Biennial of Architecture and Urbanism, on show from April 6 through June 4 at the Former Residence of the Ambassadors of Spain in Washington, D.C. 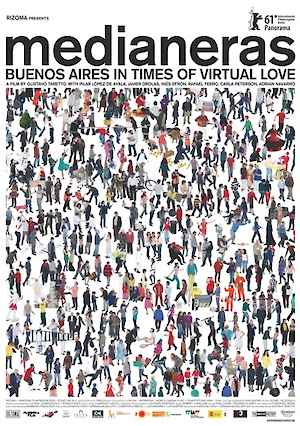 Martín and Mariana are slightly damaged people who live in buildings just opposite one another. While they often don’t notice each other, separation might be the very thing that brings them together.

Director Gustavo Taretto pays homage to the city of Buenos Aires as he reflects on how urban chaos, as well as new technologies, can unite people but also keep them apart (as the sidewalls of the title). Mixing animation, photography and graphic art he reveals the characters’ isolation and anxieties that are a staple of modern life in a noisy city that nonetheless has an irresistible charm.