SPAIN arts & culture presents the film People in Places (Gente en Sitios), as part of the Ibero-American Film Showcase 2017, which takes place from April 19 to May 19 in various venues. 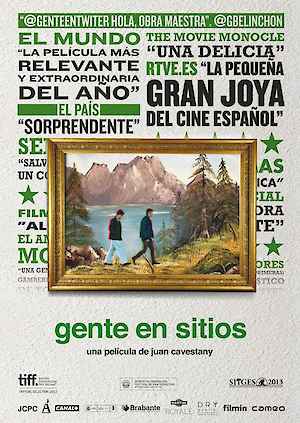 This independent, microbudget film is a plotless series of surreal, absurdist sketches: a housewife has a face transplant; considerate burglars tidy up the house they have robbed; a waiter turns a simple order into a Tolstoy-size manuscript; a father picking up his son from school gets trapped in a no-exit news program… The recent economic crisis (and its upending of ordinary reality and logic) is the subtext linking the sketches, which feature gratis guest appearances by many of Cavestany’s well-known actor friends, including Antonio de la Torre, Eduard Fernández, and Maribel Verdú.

The Ibero-American Cultural Attachés Association (AACIA) has the mission to promote, disseminate, and preserve the heritage, culture, and art of Iberoamerica in the Washington, D.C. area, while working actively to build bridges between Latin America, Portugal, Spain, and the United States. This mission is achieved by touching a wide and varied audience through cultural activities and media outreach such as the Ibero-American Film Showcase.

The Former Residence of the Ambassadors of Spain also hosts the screening of the Paraguayan film The Gate of Dreams on May 10 at 6:30 pm.

The Gate of the Dreams

Augusto Roa Bastos, awarded with Spain’s prestigious Cervantes Literary Prize in 1989, is the author of Son of Man and I the Supreme, among others major works translated to many languages. A geographical and poetic adventure, in which documentary and fiction mix to reveal the mythical universe of the most important Paraguayan writer –one of the greatest of the Spanish language – and the past and present reality of Paraguay.