Life and Death on the Camino de Santiago: Modern Science amid the Remains of Medieval Pilgrims

Santiago de Compostela, along with Rome and Jerusalem, ranks among the most visited Christian shrines worldwide. Since the beginning of the 9th century when the tomb of the Apostle St. James was discovered, journeys to his burial site grew in popularity, especially from the 11th through the 13th centuries. Santiago has emerged as the last great Christian center to maintain a pilgrimage trek in the same way as in the Middle Ages. Every year more than 400,000 pilgrims and 3,5 million tourists arrive from across the planet to northwest Spain to enter the cathedral that shelters the saint’s remains. Across the centuries sacred routes connected Christendom, co-existing with thriving commercial networks. Multicultural populations arose in northern Iberia inhabited by pilgrims, merchants, peasants and sailors attracted by fresh socio-economic opportunities.
Not all travelers survived. Modern forensic science has reverently explored more than 400 public burials from over 35 sites across northern Iberia – including the medieval tomb chamber beneath the floor of the cathedral itself. Radical new technologies can evaluate bone health and deformities, radiocarbon dating, isotope residues and DNA. Together they offer startling new perspectives on religious expression and social mobility. 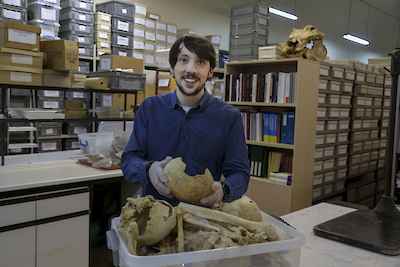 Patxi Pérez (1988, Santiago de Compostela, Spain), received a BA in History with triple specialization in Archaeology, Prehistory and Medieval Age at the University of Santiago de Compostela (2012). He also received a MSc in Archaeological Sciences at the University of Bradford (2015). In 2016 he obtained the La Caixa Banking Foundation Grant for Doctoral Studies.

He is currently a PhD candidate in the Forensic Analysis Program at the Faculty of Medicine at the University of the Basque Country (November 2016-present), and a research associate at the Department of Archaeology in the Max Planck Institute for the Science of Human History (Jena, Germany).

Patxi Pérez is committed to applying archaeological science methodologies such as osteology, stable isotope, radiocarbon dating and aDNA, within multidisciplinary research programmes that are focused on geographical mobility, diet, pathologies and genetics, linked to religious and ritual contexts. Since 2015, Ramallo is the head of an interdisciplinary project about the origin and evolution of the Medieval Camino and the Cathedral of Santiago de Compostela.

Professor George Greenia did his undergraduate work at Marquette University in Milwaukee and PhD at the University of Michigan. He is a specialist in the language, literature and linguistic of medieval Spain and teaches courses on Spanish Language, Epic and Nationalism, Hispanic Folktales, and Love and Prostitution in Medieval Spain. He is co-founder of the William & Mary Program in Medieval and Renaissance Studies and founder of the William & Mary Institute for Pilgrimage Studies.

His interest in world pilgrimage spans many periods, territories and traditions, and he is an authority on the legendary Camino de Santiago in northern Spain where he has trekked over 4,000 miles, half on bicycle, half on foot. Most summers he takes William & Mary undergraduates backpacking on the pilgrimage trails to conduct interdisciplinary field research. Longtime professional editor of journals and an encyclopedia in his field, in 2007 Greenia was both recognized as the Distinguished Editor of the year by the Council of Editors of Learned Journals and was knighted by order of the king of Spain and awarded the Cross of the Order of Isabel the Catholic.

George Greenia has long been an advocate for GLBT students and was faculty facilitator of the Gay Student Support Group every Monday night for 24 years. He contributed to establishing non-discrimination policies at William & Mary and continues to advocate for domestic partner benefits.

Presented by the Cultural Office of the Embassy of Spain in Washington, D.C., in collaboration with William & Mary