Segundo de Chomón (1871–1929), the brilliant Spanish trickster and filmmaker, is frequently compared to his French contemporary Georges Méliès. (In fact, the two men worked together briefly in Paris while Chomón was producing films for Pathé Frères.) Chomón’s fantastic narratives are filled with animation and special effects, surprising twists, and tricks of the eye that amaze and amuse. 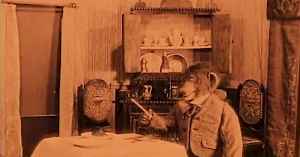 Presented by National Gallery of Art and the Italian Cultural Institute.