Pedro Almodóvar is the most internationally acclaimed Spanish filmmaker since Luis Buñuel, and AFI Silver presents a thorough survey of his feature films.

The iconoclastic Spanish filmmaker Pedro Almodóvar may have made his reputation as an enfant terrible, but his contributions to world cinema –20 feature films; Oscars®, Golden Globes, Goyas, Donatellos and César awards; a career retrospective at MoMA– now place him in the category of grand master.

As Almodóvar continues to grow as an artist, his work takes its rightful place among the greats of world cinema. Following wide acclaim for his latest masterpiece Julieta, AFI Silver presents a thorough survey of Almodóvar’s feature films. 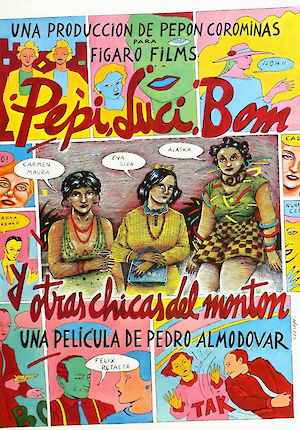 Pedro Almodóvar’s first feature explores life in Madrid during Spain’s infamous Movida Madrileña, the exuberant post-Franco counter-cultural movement of which Almodóvar himself was a driving force. Highlighting punks, musicians, wild parties, drugs, empowered women and lots of sex, Almodóvar crafts a crazy and daring comedy that epitomizes the barrier-breaking thirst of a taboo-ridden society experiencing the resurgence of democracy and its corresponding freedoms. 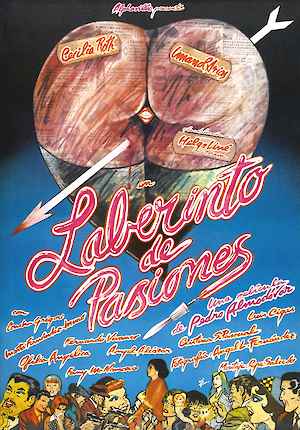 A colorful cast of characters lights up this hilarious tale overflowing with cheesy dramatic irony. Cornily named nymphomaniac Sexilia (Cecilia Roth) falls for Riza (Imanol Arias), the gay son of the Emperor of Tiran (a fictional Middle Eastern state). Sexilia’s psychoanalyst, Susana, has the hots for Sexilia’s father, who unfortunately is a sex-averse gynecologist. Among his patients is Princess Toraya, ex-wife of the Emperor of Tiran, who is dead-set on being impregnated by her stepson Riza. A chain of twisted relationships makes this outlandish film, Pedro Almodóvar’s second feature, a continuation of his cathartic release following the oppressive reign of Franco. (Note courtesy of MoMA.) 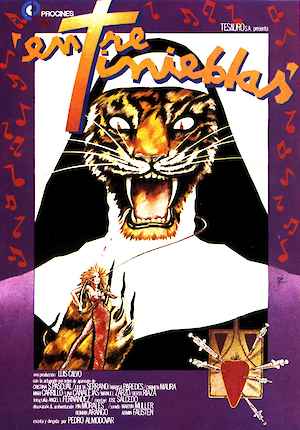 What have I done to deserve this? (¿Qué he hecho yo para merecer esto?) 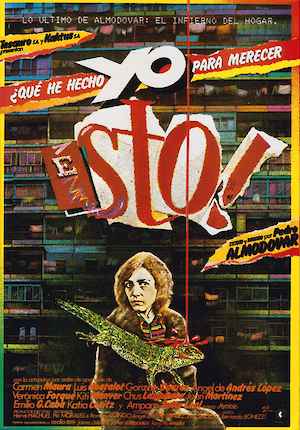 Overworked Gloria (Carmen Maura) takes multiple cleaning jobs to make ends meet. Her unforgiving life is inhabited by a cast of eccentric characters: an abusive taxi-driver husband who schemes to forge Hitler’s handwriting, a drug-dealing teenage son who is the actual forger, an unappreciative mother-in-law who hides her sweets and a prostitute neighbor who pays Gloria to sit in on sex acts she performs with exhibitionist customers. In this absurd and oppressive environment, what is a woman like Gloria to do –in Almodóvarian fashion? Drugs, murder, sex and selling off a younger son to a pedophile dentist helped make this tragicomedy the auteur’s first international success. (Note courtesy of MoMA.) 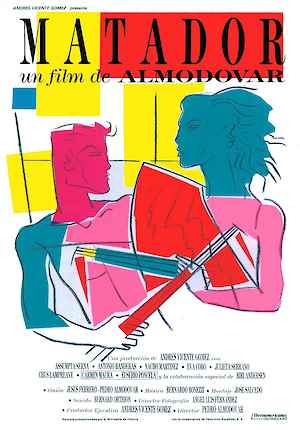 Diego (Nacho Martínez) is a former star bullfighter forced into early retirement after being gored by a bull. Maria (Assumpta Serna) is a femme fatale lawyer dressed to kill in androgynous business suits. A shared obsession with blood and murder brings the two into an alliance. Enter Ángel (Antonio Banderas), Diego’s bullfighting student, who is, ironically, scared of blood. After an unsuccessful rape attempt, Ángel turns himself in to the police and confesses to it, as well as to multiple murders he did not commit. Mysteries, killer instinct, religion and sexual desires collide in this dark comedy. (Note courtesy of MoMA.) 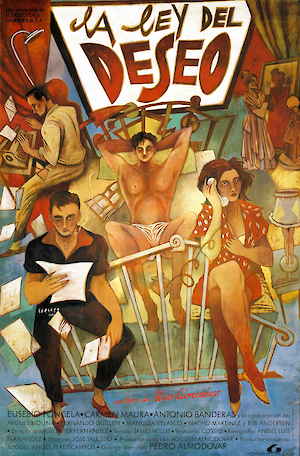 In this surreal psycho-thriller, Antonio (Antonio Banderas) is driven to extremes of passion after viewing one of soft-core auteur Pablo’s (Eusebio Poncelas) films. The pair embark on an affair, but Antonio soon becomes obsessive, kicking off a chain of entanglements steeped in desire, jealousy and deceit. Pedro Almodóvar’s regular Carmen Maura plays Pablo’s transsexual sister, whose ex-lover’s daughter is kidnapped by Antonio to blackmail the director into one last dread-filled assignation. Law of Desire is a pitch-black, barking-mad but surprisingly moving melodrama from Almodóvar’s enfant terrible years. 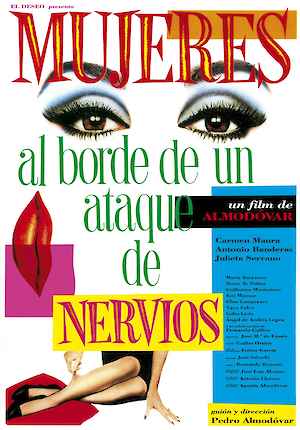 This absurdist comedy, a landmark film for Pedro Almodóvar, was a worldwide hit, winning multiple Goya Awards and an Oscar® nomination. Dumped by her lover, soap actress Pepa (Carmen Maura) is on a mission to track him down and deliver a message. Along the way, she’s distracted by her ditsy friend Candela (María Barranco), who has recently discovered her boyfriend is a terrorist; her ex-lover’s son Carlos (Antonio Banderas), who wants to sublease Pepa’s apartment; and his crazy mom (Julieta Serrano), out of the asylum and ready for revenge. Not to mention that Pepa also needs to find the right pair of shoes in which to confront her ex. 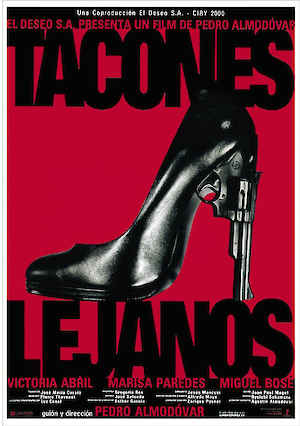 This colorful blend of kinky sex, melodrama and murder features Victoria Abril as Rebecca, a news anchorwoman whose life turns upside down when her estranged movie-star/singer mother, Becky (Marisa Paredes), returns after 15 years to discover Rebecca married to one of her old flames. When Rebecca’s husband turns up murdered, she confesses in a live telecast. But is she covering for her mother? A great musical jail sequence and Rebecca’s tryst with a mother-impersonating drag queen add a few more turns to Pedro Almodóvar’s twist-laden gem. 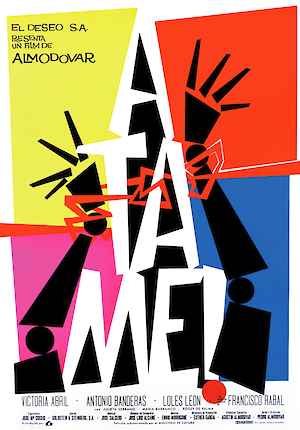 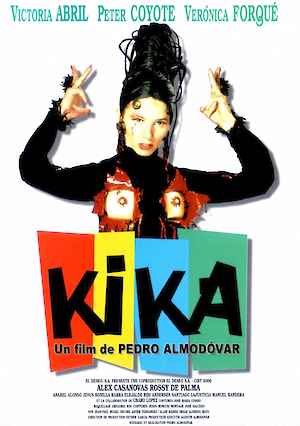 This is the type of comedy that only Pedro Almodóvar could make –a daring farce which takes on motherhood, serial killers, reality television, suicide and media sensationalism. The convoluted plot: Ramón (Alex Casanova) is an obsessive narcoleptic engaged to makeup artist Kika (Verónica Forqué) but secretly in love with his stepfather, Nicholas (an American writer played by Peter Coyote). Meanwhile, Casanova’s ex, Andrea Scarface (Victoria Abril), the host of Spain’s Most Violent Home Videos, witnesses a crime committed against Kika, and will do anything to catch it on camera.

The Flower of my Secret (La Flor de mi Secreto) 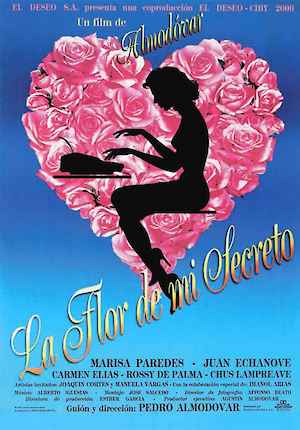 For years, Leo has been writing bestselling romantic novels (under the pseudonym Amanda Gris), but with her personal life in shambles, she finds it impossible to produce such sunny material. Unable to accept that her troubled marriage to Paco is over, Leo finds herself creatively and emotionally blocked. She finds little consolation from her mother and sister Rosa, who are so busy bickering with each other that they don’t notice Leo’s distress, and her best friend Betty, a psychologist who is secretly having an affair with Paco. One bright point is a new friendship with Angel, cultural editor of the daily paper El País, who unknowingly hires her to write an attack on her nom de plume, Amanda Gris. 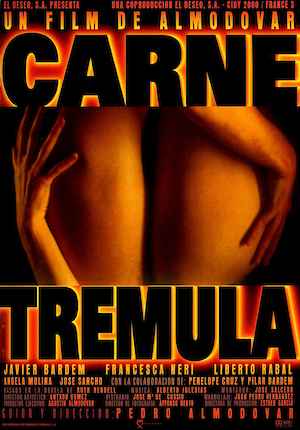 Talk to Her (Hable con Ella) 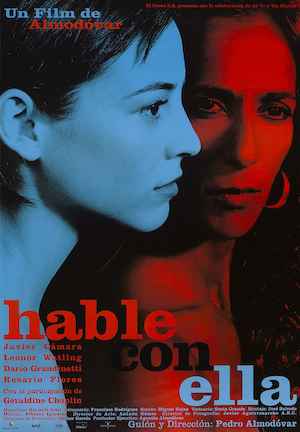 Two men forge a relationship as they use the intricacies of the spoken word –however improbably– to communicate with the comatose women they love. Nurse Benigno Martín (Javier Cámara) talks to felled ballerina Alicia (Leonor Watling), while journalist Marco Zuluaga (Darío Grandinetti) confides in gored bullfighter Lydia González (Rosario Flores). As the stories of all four lives crisscross between past and present, Pedro Almodóvar weaves a touching and highly original tale, for which he won an Oscar® for Best Original Screenplay.

All About My Mother (Todo sobre mi madre) 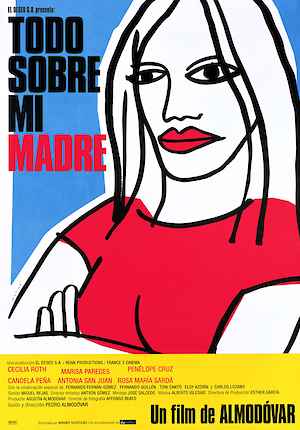 In Pedro Almodóvar’s Oscar®-winning homage to women –and all men who want to become women– single mother Manuela (Cecilia Roth) watches her only son die on his 17th birthday while running to get a stage actress’ autograph. As the heart-broken mother embarks on her quest to find the boy’s transsexual father, she befriends a richly diverse assortment of women, including the actress her son died pursuing (Marisa Paredes), a transgender prostitute named Lola (Toni Cantó) and a young, pregnant nun (Penélope Cruz). 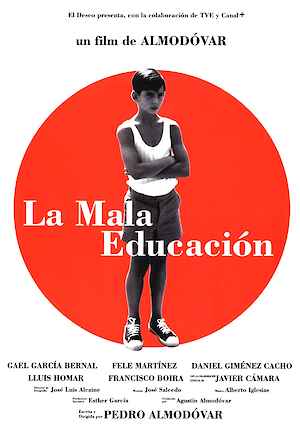 Enrique (Fele Martínez) is a young film director. Actor Ignacio (Gael García Bernal) turns up looking for work and identifies himself as a childhood friend. Enrique doesn’t recognize the man, but his reaction to the name Ignacio signals a deeply intertwined past. Ignacio has written a story and asks Enrique to make it into a film –and cast him in the lead. The story is based on their time at Catholic boarding school, where they fell in love but were pulled apart by Father Manolo (Daniel Giménez Cacho). Moving between past and present, Bad Education is a film noir-melodrama hybrid layered with shadowy pasts and unexpected twists. (Note courtesy of MoMA.) 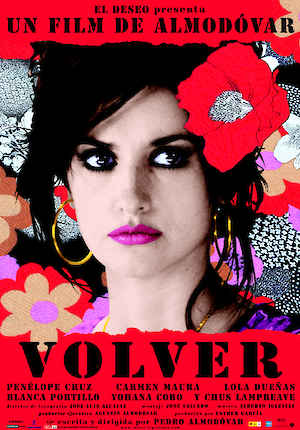 Raimunda (Penélope Cruz) and Sole (Lola Dueñas) are sisters in a working-class neighborhood south of Madrid, whose parents died a few years prior in a tragic fire. One day, their dead mother Irene (Carmen Maura) returns as a ghost to resolve issues with Raimunda, who is busy dealing with her husband’s death and calming her daughter. Mysteries unfold in this story filled with death, incest, adultery, murder, fear and humor. The ensemble cast of six female actors jointly won the Best Actress award at Cannes, and Cruz became the first Spaniard to be nominated for a Best Actress Oscar®. (Note courtesy of MoMA.) 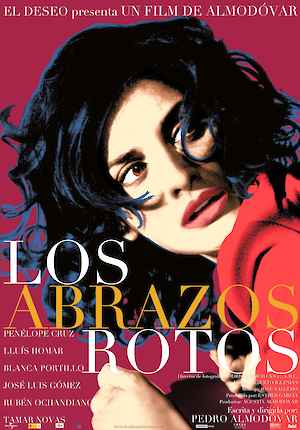 News of the death of powerful Madrilenian businessman Ernesto Martel (José Luis Gómez) forces Harry Caine (Lluís Homar), a blind man who was once a filmmaker, to confront his tragic past. Lena (Penélope Cruz) was the star of Caine’s last feature, Girls and Suitcases, with a plot similar to Pedro Almodóvar’s Women On The Verge Of A Nervous Breakdown. Although she was Martel’s girlfriend at the time, the director and actress fell in love during filming. The film-within-a-film, combining multiple genres, brings together love, obsession, voyeurism and melancholy in a moving meditation on filmmaking and cinema. (Note courtesy of MoMA.)

The Skin I live in (La Piel que Habito) 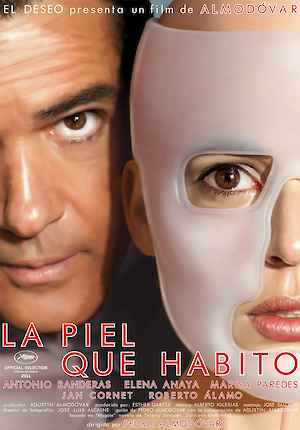 Plastic surgeon Robert Ledgard (Antonio Banderas) turns his mansion into an underground operating room where he unscrupulously seeks to create a synthetic skin that could have saved his deceased wife, who was badly burned in an accident. Vera (Elena Anaya), with a shocking past to be revealed later, is Ledgard’s involuntary specimen and captive human sculpture. The film reunites Pedro Almódovar with Banderas for the first time since Tie Me Up! Tie me Down! (1990), which also dealt with a captor and his captive. The Skin I live in is a psychological thriller and horror story of unmatched cruelty and madness. (Note courtesy of MoMA.) 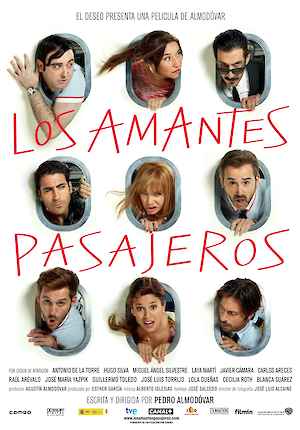 Something has gone wrong with the landing gear of a plane en route from Madrid to Mexico City. Is drugging the passengers and entertaining them with music and dance the best way to maintain calm? Find out in this absurd, raucous comedy featuring an outlandish crew and a group of eccentric passengers; the cast includes Javier Cámara, Pepa Charro, Cecilia Roth, Carlos Areces, Lola Dueñas, Raúl Arévalo, Paz Vega, Antonio Banderas and Penélope Cruz. (Note courtesy of MoMA.) 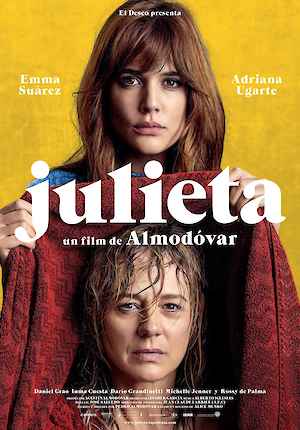 Pedro Almodóvar’s 20th feature film weaves three Alice Munro short stories into a Hitchcockian melodrama about mothers and daughters, passion and grief and the hard changes one undergoes in a lifetime. Emma Suárez stars as Julieta, a Madrid art dealer who has been estranged from her adult daughter for 13 years. Shaken by a chance encounter with her daughter’s childhood friend (Michelle Jenner), Julieta makes a deep dive into her own long-buried past. She recalls how, as a student in the 1980s, her younger self (played by Adriana Ugarte) met the man she would fall passionately in love with, Xoan (Daniel Grao), on an overnight train journey.