Two Spanish films premiere at the second edition of ADFF: “Mies on Scene. Barcelona in Two Acts” by Xavi Campreciós and Pep Martín, and “Renzo Piano: The Architect of Life” by Carlos Saura.

The Architecture & Design Film Festival: D.C. (ADFF) is the nation’s largest film festival devoted to the creative spirit that drives architecture and design. Over the course of three days, the Festival will screen films that explore issues of social justice, diversity, technology, and equity, through the life and work of practitioners like Frank Gehry, Mies van der Rohe, Leslie Robertson, Renzo Piano, and Diébédo Francis Kéré. 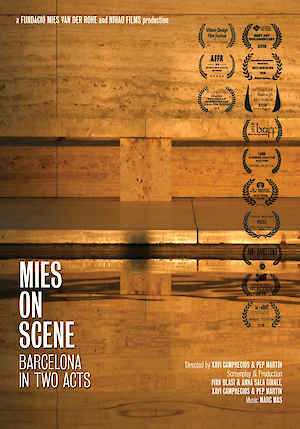 The Barcelona Pavilion, the masterpiece with which Ludwig Mies van der Rohe and Lilly Reich staged their revolutionary ideas in 1929, changed the history of architecture forever. It only existed for eight months but paradoxically its image was always alive in the minds of generations of architects around the world, becoming one of their greatest influences. The Pavilion is still surrounded by myths and mysteries. This documentary frames the building into a portrait in two acts of the city that made possible its construction in 1929 and its reconstruction in 1986.

Renzo Piano: The Architect of Life

Celebrated Spanish director Carlos Saura captures the genius of one of the most famous Italian architects in the world: Renzo Piano, whose designs include the Center Pompidou in Paris, France, the Auditorium Parco della Musica in Rome, Italy, and The New York Times Building in New York City. Saura follows Piano during the design of the Botín Center in Santander, Spain, examining his creative process.

Presented by the National Building Museum and the Revada Foundation. Image: still from Mies on Scene, Barcelona in Two Acts by Xavi Campreciós and Pep Martín