“Más Almodóvar” is a special series program that features films “The Flower of My Secret,” “All About My Mother” and “Volver,” of the Oscar-winning Spanish director Almodóvar.

The Flower of My Secret, All About My Mother and Volver, are all Almodóvar films in which he explores the lives of women caught between two worlds, chaos and culture, sanity and insanity, life and death.

Pedro Almodóvar is a Spanish Oscar-winning director and screenwriter. Born on September 25, 1949, in Calzada de Calatrava, Spain, Pedro Almodóvar went on to become an internationally recognized filmmaker who’s directed more than a dozen movies, some of which have been controversial. After the hit Women on the Verge of a Nervous Breakdown, Almodóvar won Academy Awards for All About My Mother and Talk to Her.

The Flower of My Secret 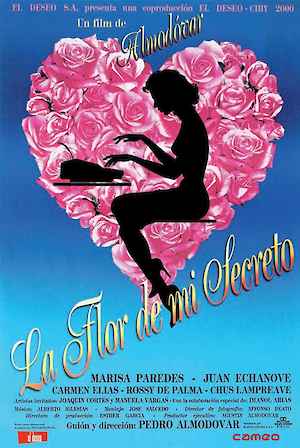 Marisa Paredes is Leocadia (“Leo”) Macias, a woman writing “pink” romance novels under the alias of Amanda Gris that are very popular all across Spain. Unlike her romantic novels, her own love life is troubled. Leo has a less than happy relationship with her husband Paco, a military officer stationed in Brussels then later in Bosnia, who is distant both physically and emotionally. Leo begins to change the direction of her writing, wanting to focus more on darker themes such as pain and loss, and can no longer write her Amanda Gris novels, whose publishers demand sentimental happy-endings, at least until her contract is up. She begins to reevaluate her life through her relationship with her husband, her supposedly best friend Betty, her “crab-faced” sister Rosa and her bickering elderly mother. She also meets Angel, a newspaper editor who quickly falls for Leo and her writing.

All About My Mother 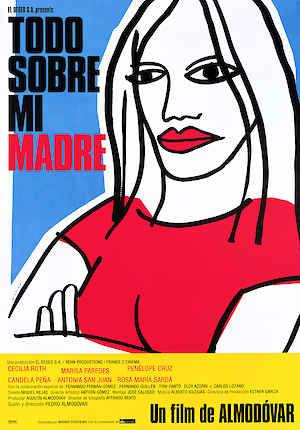 A Greek saying states that only women who have washed their eyes with tears can see clearly. This saying does not hold true for Manuela. The night a car ran over her son Esteban, Manuela cried until her eyes ran completely dry. Far from seeing clearly, the present and the future become mixed up in darkness. That same night, while waiting in the hospital, she reads the last lines written by her son in a notebook that he always kept by his side. 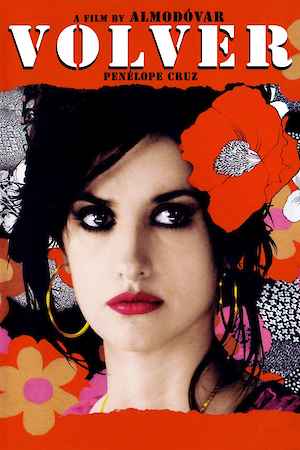 Three generations of women survive easterly wind, fire, madness, superstition and even death through goodness, lies and an unlimited vitality. They are: Raimunda, married to an unemployed worker, and her teenager daughter. Sole, her sister, who earns her living as hairdresser. And their mother, dead in a burning, with her husband. This character comes as an apparition first to her sister and then to Sole, even though the ones she had unsettled affairs with were Raimunda and her village neighbour, Agustina. ‘Volver’ is not a surreal comedy, though it might seem so at times. The living and the dead live together without problems, but provoking hilarious situations and others full of deep and genuine emotion.