Organized by Park City Film, the Foreign Cinema For Kids program aims to promote cross-cultural understanding and create a forum for Spanish and French native speakers to celebrate and connect to their cultures. 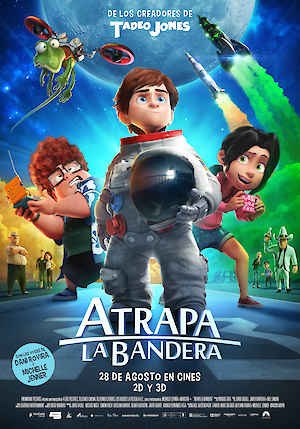 Mike Goldwing, a plucky, determined 12-year old boy, is the son and grandson of NASA astronauts. His grandfather Frank, a once revered, but now forgotten retired astronaut, lives his days isolated from his family after missing out on his big chance to fly to the moon with Neil Armstrong and Buzz Aldrin as a part of the Apollo XI mission. When an eccentric billionaire sets an evil plan to fly to the moon, steal the moon’s vast mineral resources, and destroy the American flag planted by the Apollo XI team, Mike embarks on a magnificent adventure as a stowaway on the space shuttle. Accompanied by his grandfather, best friends Amy and Marty, and a clever chameleon, Mike blasts off to the moon to capture the flag and reunite his family.

Presented by Park City Film, with the collaboration of the Cultural Office of the Embassy of Spain in Washington, D.C., and Park City Library as part of the Foreign Cinema for Kids program

There is no other event scheduled in Salt Lake City.

There is no other event programmed in Kids.