Five Spanish-language women poets and creators come together on Women’s Day to present poetry as a vessel that vindicates current female power in the new paths of our language. 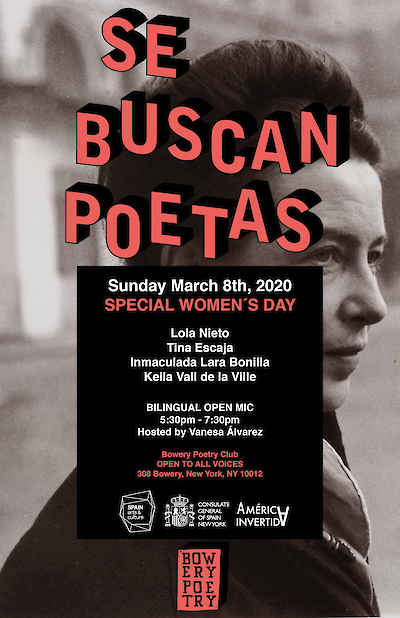 To celebrate Women’s Day on March 8, 2020, the Bowery Poetry Club hosts a poetry event with special guests and an open mic. Se Buscan Poetas Women’s Day is a gathering and celebration of women in poetry in this new decade.

This event is a call to reunite the Spanish feminine poetic scene of New York at the Bowery Poetry Club. Experienced and amateur poets will take the stage to recite, talk, discuss and share their art. A union between feminine and feminist poetry, thoughtful and activist poetry, it aims to showcase the strength of the artists of the spoken, written or performed word around language and sound.

Vanesa Álvarez (Vigo, 1985) hosts the bilingual event. Non-Spanish speakers will be able to read the poems on screen in English, and anyone can grab the open mic and speak in their language of choice after the performances.

Vanesa Álvarez is a Spanish muralist and visual artist based in Brooklyn. She graduated in plastic arts and design, and works as a creator in graphic and performing arts, fashion, poetry and urban art. She has made large-scale murals in both Spain and New York, photographic and graphic design exhibitions in art galleries in Spain and Portugal and also poetic actions in Mexico.

Álvarez is co-director of the Kerouac International Poetry and Performance Festival, which has been a platform of exchange for artists and poets between America and Europe for 10 years.

About the guest poets

Tina Escaja (Zamora, 1965) is a writer, literary critic, performer and digital artist. She currently holds the chair of Ibero-American Literature in the University of Vermont. Her digital work and hypertextual has been exhibited in museums and galleries in Spain, Mexico and the USA. Also known as [email protected] Pérez, Tina Escaja has served as Vice President and President of the Association of Gender and Sexuality (previously called the International Association of Hispanic Female Literature and Culture), and ALDEEU (Association of Spanish Graduates and Doctors in the U.S.). She is President of Feministas Unidas, Inc. and Correspondent of ANLE (American Academy of the Spanish Language).

Inmaculada Lara-Bonilla (Madrid) is a professor of Latin and Latin American Studies at Hostos Community College, City University of New York. She has also been a professor at Harvard University, Oberlin College and Syracuse University, where she founded in 2011 the Cultural Center dedicated to the Public Humanities and the Visual and Performing Arts. She has published and lectured on transnational Hispanic literatures, Latin American literature of post-movements in the United States, non-fiction and feminist theory. Her poetry has appeared in magazines such as Stone Canoe and Literal Magazine. Lara-Bonilla’s research has focused on the literature and feminist thinking of Latin American women

Lola Nieto (Barcelona, 1985) is a Doctor in Hispanic Philology from the University of Barcelona. She works as a Language and Literature teacher in a secondary school and coordinates, with Antonio F. Rodríguez and Laia López Manrique, the artistic creation magazine Kokoro, as well as the autonomous collection Kokoro Libros of the Kriller71 publishing house, which also co-directs, with Aníbal Cristobo, the Púlsar collection. She has published Alambres (2014) and Tuscumbia (2016).

Hosted by Se Buscan Poetas and Bowery Poetry Club. With the support of SPAIN arts & culture and the Consulate General of Spain in New York