Spanish writers and Granta authors David Aliaga, Alejandro Morellón, and Irene Reyes Noguerol join Valerie Miles for a conversation about the literary world as part of the “Brooklyn Book Fest.”

David Aliaga (1989) is a writer recognized by Granta as one of the best young Spanish-language novelists of the last decade. His fiction books include Y no me llamaré más Jacob (2016) and El año nuevo de los árboles (2018), some of whose short stories have been translated into English or German. Aliaga is a specialist in representation of Jewish identity, both in contemporary literature and in comic books, and in 2018 he co-directed Séfer, the Jewish Book Festival of Barcelona. Last year, the city of Barcelona awarded him with the Montserrat Roig scholarship for creative writing.

Irene Reyes-Noguerol (Seville, 1997) has a BA in Hispanic Philology and has completed a Creative Writing Workshop at the Camilo José Cela University of Madrid. She is currently working as a Spanish language and literature teacher.

Reyes-Noguerol has won several awards, both in national and international story contests, and her texts have appeared in 14 anthologies. At 18 she published her first solo book, Caleidoscopios, followed by De Homero y otros dioses. In 2021, Reyes-Noguerol was selected by Granta as one of the best writers in Spanish under the age of 35. 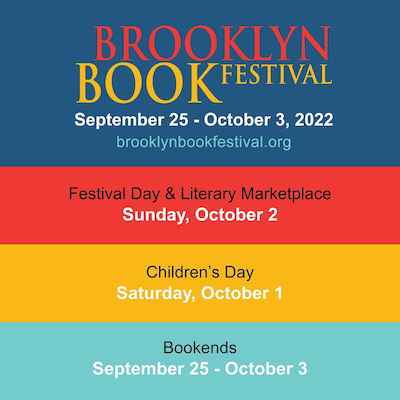 The Brooklyn Book Festival is New York City’s largest free literary festival and connects readers with local, national and international authors and publishers during the course of a celebratory literary week. The Festival presents original programming and enthusiastically welcomes New York City’s cross cultural book readers as well as national and international attendees. The Festival is known for fostering creative dialogue among the authors, presenting new literary voices as well as established authors, and for serving the literary community by providing a highly visible platform for the work of authors and publishers.

The Brooklyn Book Festival was launched in 2006 as a one-day event to address the need for a free, major literary event that embraced the diverse constituencies of New York City. It has since grown to include 8 days of city-wide Bookend events, its flagship Festival Day with 300 authors and a Literary Marketplace with 250 independent and major publishers, and the BKBF Children’s Day that celebrates childhood reading. The Festival’s credo is “hip, smart and diverse”. This year’s dates are September 28 – October 5.

Presented by the Brooklyn Book Festival and sponsored by the Spain-USA Foundation and AC/E.