“Decorado” by Alberto Vázquez participates in the third edition of the Festival that brings the most groundbreaking works from almost 20 E.U. countries to illustrate the spirit of experimentation and creativity, and test the boundaries of animation with unique visuals.

Each night features a panel discussion with gurus of contemporary animation from both sides of the Atlantic. Emphasizing the new, the exciting and the unconventional, while finding the space to reflect on the continuing potential of the traditional techniques as well, Animated Spirits gives a carefully curated program, picking from the cream of European animation to bring to the NYC audiences.

Curated by Anna Ida Orosz (HU), animation historian, lecturer at the Moholy-Nagy University of Art and Design and co-founder and curator of Primanima World Festival of First Animations, Budapest; and Holger Lang (AT), a Vienna-based animation artist, filmmaker, producer and teacher, often guest lecturer at various U.S. universities and board member of ASIFA Austria. 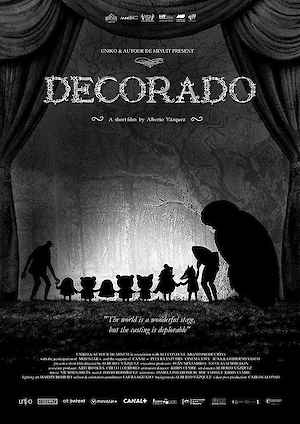 Decorado is an existentialist, ironic dark tale about the sins of society and of human relationships presented in a traditional fable setting.

Born in 1980, Alberto Vázquez works as an animation director, illustrator and cartoonist. His books and comics have been published in countries such as Spain, France, Italy, Brazil and Korea. His work has been nominated and won the Spanish Goya Awards for Best Animated Short Film in 2012. He has won over 60 awards at international festivals and his work has been exhibited in prestigious festivals worldwide, such as Annecy, Clermont-Ferrand, Animafest Zagreb and Slamdance.

The Festival runs from Tuesday, May 9 thru Thursday, May 11 and features 44 animated shorts from 19 countries. View the full program (PDF).