Visuality explores the visual aspects of music. Presented by Cre.Art Project, each piece explores how light and sound can intersect in their purest form. The collective moves into new territory by using mapped video projection to transform the stage into a canvas for a unique experience. The overall work is fluid, with each piece adapting uniquely to the space used. There are currently nine works in Visuality’s repertoire. Included are compositions by Marcos Fernandez, Johannes Brahms, Jacob Ter Veldhuis, Claude Debussy, Joan Tower, Frederic Rzewski and Paul Moravec.

Founded in Spain in 2006 by Guillermo Laporta and Tagore González and joined later by designer David Orrico, Cre.Art Project gathers musicians, visual artists, dancers, actors, writers, designers, and acrobats from all over the world to create original performances. The collective works through multidisciplinary interaction; and has produced shows in Europe and America collaborating on a wide range of projects in music, theatre, dance and visual arts. They have appeared at leading venues and festivals across Europe with reviews stating “an explosion of rhythm, color and sensitivity” (Diario del AltoAragón) and “a shocking staging” (El País). They have won top prizes at Injuve Chamber Music Competition and the Montehermoso Contemporary Creation Award.

A new ensemble devoted to multidisciplinary events with a handful of very sharp freelance musicians. 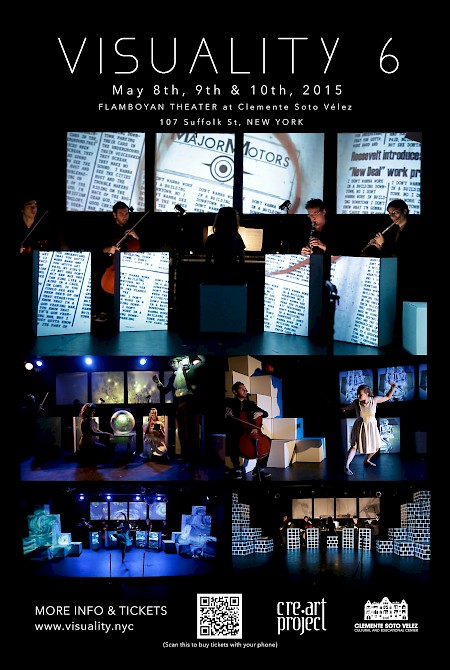