This adaptation of Luca Pizzurro’s work by Spanish director Sergio Toyos narrates the thoughts of a strange but reassuring-looking character who performs his “actions” in the name of love. 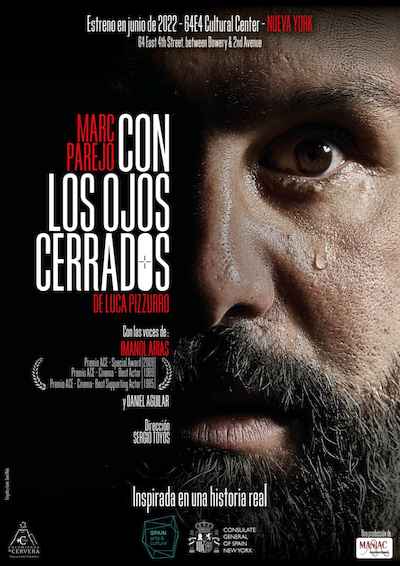 Bruno’s story speaks of a point of no return. Of a border that, once crossed, marks you forever –a psychological cross-section of rare crudeness. The actor Marc Parejo confronts us with an uncomfortable, unusual, destabilizing point of view. The author, identifying himself with the psyche of an executioner, follows the thoughts of a strange character. But behind this reassuring appearance lies a shocking truth.

In this adaptation I have modified the poetic language present in the original text, transforming it into a crude and direct narration, but maintaining the arc of the main character that Pizzurro has built so well. My intention is to deal with the theme that runs through the work in the most emphatic way possible. For this I have eliminated several of the euphemisms that the Italian playwright uses to soften some of the passages that the protagonist narrates throughout the piece. These euphemisms help, in Luca Pizzurro’s text, to distance himself from history; Hard and difficult from start to finish. For this version I have decided to make the language contemporary and adapt the Italian expressions to other Spanish ones, so the poetic dimension of the original was too forced and I decided to eliminate it.

With regard to staging, I am interested in moving away from naturalism to show the public the character’s emotions through light, space and sound effects. Simplicity and symbol become, in this montage, two key concepts. At a time when freedom of expression is faltering, this montage becomes a necessary and provocative cry. And it shows that the text, written fifteen years ago, remains taboo. Because sometimes, to fully understand a story, you have to look where no one wants to see. Inside the monster’s eyes.

Buy tickets. The 55-minute monologue will be in Spanish without subtitles, and is not recommended for children under 16.