This Goya-winning documentary addresses universal issues that threaten humanity and questions some of the foundations of the world in which we live. 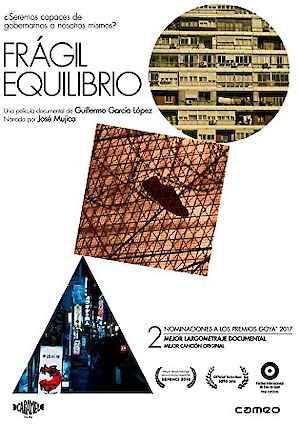 Three stories in three different continents intertwined in Frágil Equilibrio: two Japanese executives in Tokyo whose lives are in the vicious cycle of working in corporations and consumerism, a sub Saharan community in the Gurugú Mount, near the Melilla border between Africa and Europe risk their lives every day trying to cross over to the First World; and families in Spain that are destroyed by the economic downturn, the real estate speculation, political corruption and being evicted of their homes as a result. These stories are articulated through the words of José Mujica, former president of Uruguay, who throughout this Goya winner documentary addresses universal issues that threaten humanity, questioning some of the foundations of the world in which we live.

This screening is part of the 6th Annual UCLA Latin American and Iberian Film Festival, running April 16–May 1, 2018, and hosted by the UCLA Department of Spanish and Portuguese.

The screening will be followed by a Q&A session with producer Pedro González.

Sponsored by Center for European and Russian Studies, Latin American Institute, Spanish and Portuguese, PRAGDA, The Ministry of Education, Culture and Sports of Spain and SPAIN arts & culture