A showcase of various films from Latin America and the Iberian Peninsula, which explore the vast diversity of Iberian and Latino cinema.

The Boston Ibero-American Film Festival is an annual showcase of contemporary films from more than a dozen countries in Latin America and the Iberian Peninsula. Its purpose is to provide a venue for the exploration through art of the realities, the social values and the cultural identity of the region and its countries. It also allows all audiences to appreciate the diversity and complexity that characterize Latin American and Iberian cinema, by the hand of some of its most acclaimed filmmakers, and its most promising new talents. 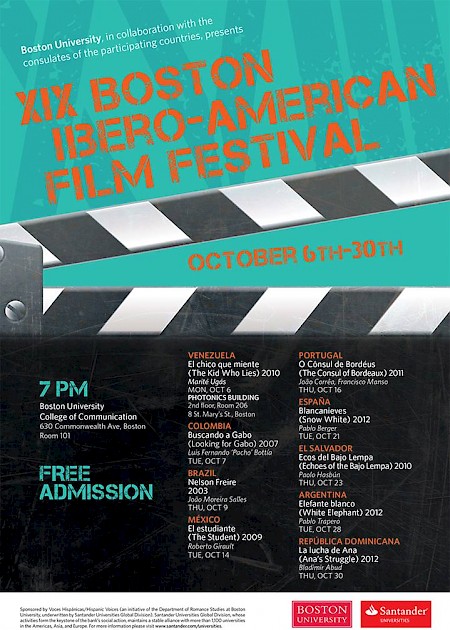 Free and open to the public.

Sponsored by Voces Hispánicas/ Hispanic Voices, an initiative of the Department of Romance Studies, Boston University, made possible by the generosity of Santander Universities Global Division. Spanish film Blancanieves presented in collaboration with the Consulate General of Spain in Boston and SPAIN arts & culture.