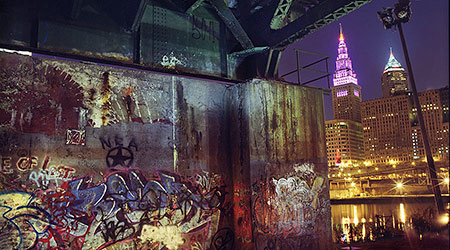 A photographic exploration of urban decay in America by Xavier Nuez.

The project, begun in 1991 by artist Xavier Nuez, is now in its 21st year and has led to journeys into dangerous neighborhoods, at times resulting in trouble. Nuez has run from street gangs, been accosted by crazed drug addicts, and has had guns pointed at him. He is often questioned and searched by the police.

With a family history of homelessness, Nuez developed a need to create monuments out of these shunned spaces. Although positive, life-affirming perceptions are not usually associated with acute urban blight, he feels compelled to dignify what has been rejected.

The New York Times has called the Alleys & Ruins series a masterpiece. The images in the series are shot in a mostly traditional manner. The photographs are taken at night, using a 50 year-old Hasselblad film camera. During the 10 to 30 minute exposures, Nuez walks around with various (colored) lights and shines them on different parts of the scene, adding color and texture to the typically drab locations.