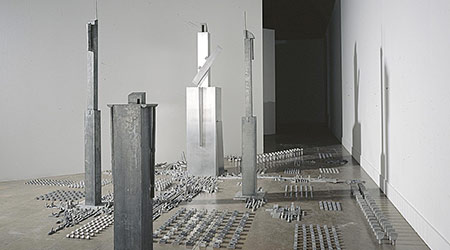 The Spanish sculptor work is based on how cities can suggest different meanings depending on the spectator.

Miquel Navarro was born in Valencia and studied in the San Carlos School of Fine Art in Valencia. He started his career in 1972 as a painter and has since worked exclusively in sculpture. Throughout his career, Navarro has received numerous awards such as the Premio Nacional de Artes Plasticas, the Alfonso Roig Prize, and the Julio Gonzalez International Prize from IVAM. He is an Academician of the Real Academia de Bellas Artes de San Fernando in Madrid.

The work of Miquel Navarro is characterized by his unmistakable representations of cities or clusters and constitute a prototype he uses for his sculptural installations when grouping together small pieces, configured as diverse urban buildings, ranging from houses to factories, from ornamental to representational. Their structure is based on what is clearly an imaginary urbanism, a key aspect of Navarro’s works, now part of the IVAM’s permanent collection thanks to the generous donation of 515 pieces. This collection of works reflects his different stages allowing viewers to appreciate his creative style.

Miquel Navarro. City Metaphors. Selections from the IVAM Collection is characterized by massive sculptures and features over a thousand pieces of different materials such as aluminum, zinc, and wood. His work is based on how cities can suggest different meanings depending on the spectator. Spread out across the gallery floor, the installations consist of sculptures that have been deconstructed in order to resemble a city seen from above. This is Navarro’s first exhibition in South Florida.

This exhibition marks the first collaboration between CIFO and the IVAM. As part of this partnership, the IVAM will host in September, CIFO’s exhibition Frames and Documents, Selections of the Ella Fontanals-Cisneros Collection.

Exhibition preview with the artist on Monday April 8, 2013 at 11 am. Presented in conjunction with the 2013 exhibition series Commemorating 500 Years 1513-2013: Spain, Florida and the Caribbean.