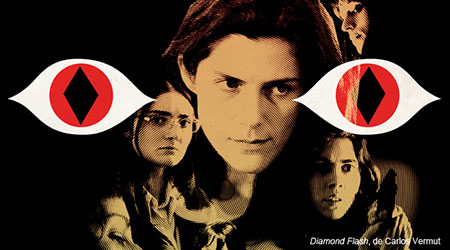 New York’s only European film festival, Disappearing Act, shares some of Europe’s most celebrated, contemporary films that are largely unknown in the U.S.

Disappearing Act V is presented by the Disappearing Act Festival Board, chaired by the Czech Center New York with European Union National Institutes for Culture and Other European Partners. Curated and produced by Irena Kovarova. Production assistance by Sven Buehrer.

Diamond Flash
An underground hit that became a sensation in Spain in spite of its DIY distribution via alternative screening venues, streaming and DVDs. In his feature directorial debut, Carlos Vermut expertly leads an excellent cast of theater professionals. Impossible to classify, the film straddles genre between mystery and personal drama, with hints of fantasy, while using an accomplished cinematic style. The story follows five women connected through one man, a mysterious character who forever changes all of their lives.
Directed by Carlos Vermut, Spain, Spain, 2011, 128 minutes. In Spanish with English subtitles. View trailer.

Free on a first-come, first-served basis. No reservations necessary.