'The Spanish Mirth: The Comedic Films of Luis García Berlanga' 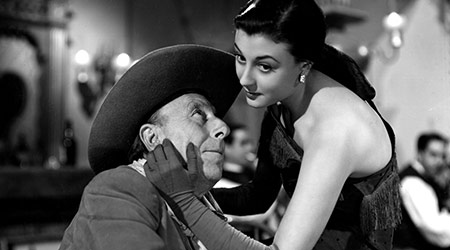 Luis García Berlanga (Valencia, June 12, 1921 – Madrid, November 13, 2010) is one of Spain’s most iconic filmmakers. His filmography is known for its morbid irony and acid satires about social and political situations. His films, at large, take place within the framework of Francoist dictatorship which makes Berlanga’s films an important part of a trajectory through history, that, in turn, allowed him to illustrate his wit and ability to bluff the censorship by recreating situations and dialogues that were not excessively explicit but of intelligent double–entendre.

¡Bienvenido, Mr. Marshall!
On Friday, March 29, 2013 at 7:00 pm. Spain, 1953, 86 minutes.
A tiny Spanish backwater pulls out all the stops to reinvent itself as a postcard-perfect Andalusian village in order to impress delegates doling out financial rewards in Berlanga’s satirical jab at Spanish national values.

The Rocket from Calabuch
On Sunday, March 31, 2013 at 3:00 pm. Spain, 1956, 93 minutes.
An A-bomb-building physicist hides out from the nuclear age in a seaside town. Mistaken for a tramp, he’s soon accepted as one of the townsfolk’s own in this quirky, Pagnol-by-way-of-Spain comedy.

El verdugo
On Saturday, April 6, 2013 at 6:30 pm. Spain, 1964, 88 minutes.
An official executioner must appoint a successor who, if luck has it, will also marry his desirable daughter. Berlanga’s masterpiece is a dark comedy backlit by the knowledge that in Franco’s regime execution was the penalty of choice.

¡Vivan los novios!
On Friday, April 12, 2013 at 7:00 pm. Spain, 1970, 83 minutes.
Hoping to seduce some Swedish sirens before getting married, a timid bank clerk leaves his ailing mother behind and heads to the beach; when his mother dies, however, things get comically complicated.

Tamaño natural
On Sunday, April 14, 2013 at 5:30 pm. Spain/France, 1973, 101 minutes.
Michel Piccoli is a Parisian oral surgeon with a new lover: a life-size sex doll from Japan. By turns rapturously absurd and innocently obscene, Tamaño natural is really about the demure dentist’s estrangement from things human and fleshy.

La escopeta nacional
On Wednesday, April 17, 2013, 7:00 pm. Spain, 1978, 95 minutes.
An oily manufacturer sponsors a hunt on the estate of a nobleman who has fallen on hard times. Berlanga’s madcap Escopeta (Shotgun) stays on target with a load of high-impact and hilarious shot.

Presented by the Pacific Film Archive, curated by Steve Seid, and made possible through the collaboration of Filmoteca Española and the Consulate General of Spain in San Francisco.