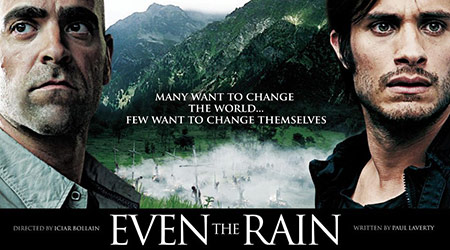 Even the Rain is a brilliant movie. At a time when the poor of the world seem to be rising up, I found myself deeply moved and completely enthralled by this film. I encourage everyone in search of a great movie to go see Even the Rain.

Obsessive idealist Sebastian has sworn to direct a film about one of the world's most iconic figures, Christopher Columbus. But not for him the lie of a genius hero on a divine mission to win "souls for Christ." Sebastian is determined to overturn the myth of the arrival of Western Civilization in the Americas as a force for good. His film will show what Columbus set in motion: the obsession with gold, the taking of slaves, and the terrible violence visited on those Indians who fought back. The brilliant actor playing Columbus constantly challenges the director, accusing him of hypocrisy and cheap manipulation. Costa, Sebastian's friend and producer doesn't give a damn. All that matters is that the film comes in on time and within budget.

Costa has a crazy plan. Despite Sebastian's fury, they will shoot in Bolivia, the cheapest, most "Indian" of Latin American countries. While the shoot progresses in and around the city of Cochabamba, civil and political unrest simmer, as the entire water supply of the city is privatized and sold to a British/American multinational. Violence increases daily until the entire city explodes in the now infamous Bolivian Water War - a war which actually took place in April 2000. 500 years after Columbus, sticks and stones once again confront the high-tech weaponry of a modern army. David against Goliath. Only this time the fight is not over gold, but the simplest of life-giving elements - water.

In Spanish with English subtitles. Get your free ticket. Doors open at 6:30 pm. Presentation and screening at 6:45 pm. Don’t miss the Spanish documentary Keep on rolling: The dream of the automobile at the Environmental Film Festival .