'Medea's Got Some Issues' by Emilio Williams 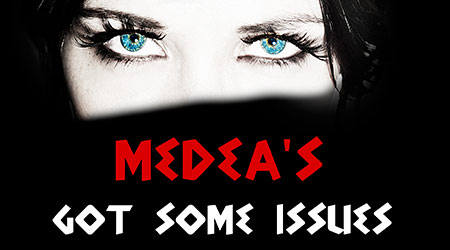 The award-winning parody of the classic Medea returns to Chicago for one night only!

Emilio is one of the great assets of contemporary Spanish theater, and he has been able to connect perfectly with the bicultural Hispano-North American reality, which is the present and the future of the United States. Remember his name!

Euripides' Medea reinvented as a laugh-out-loud farce? Once again, playwright Emilio Williams presents an irreverant and madcap dark comedy, this time inspired by that classic tragedy.

Medea's Got Some Issues is the English version of the hit parody from Spain. The title character is an unemployable Latina Diva who —more than 2,400 years after the premiere of the original Medea and without inhibitions— presents the mitigating and sordid factors surrounding her infamous case, from the sexual haste of her husband, Jason, to the misogynistic and xenophobic environment of classical Corinth.

This performance at Instituto Cervantes is an encore presentation of the play. Medea's Got Some Issues previewed at Teatro Luna in September 2012, and recently won Best International Show at United Solo Festival, Off Broadway.

Emilio Williams is a playwright, stage director, and founder of Chicago's newest theater company, The Chicago Theater Sweatshop, which is dedicated to producing comedies and to facilitating exchange among international theater artists. Widely regarded in Spain as one of the most promising new voices of contemporary theater, Williams moved to Chicago in 2011. In 2010, his alternative hit comedy Tables and Beds was selected among 80 plays from 12 countries as the winner of the IV Premio El Espectaculo Teatral. Tables and Beds will receive its U.S. premiere at Stage773 in March 2013. In 2012, his comedy, Smartphones- a Pocket Size Farce had its world premiere at Chicago's Trap Door Theater. His next world premiere, Your Problem with Men, is currently under development at Teatro Luna, Chicago's all-Latina theater company, where Williams is an Artistic Associate.

Ana Asensio is an actress, producer and director who currently divides her time between her native Madrid and New York City. Asensio’s film acting credits include: The Afterlight, co-directed by Craig Macneill and Alexei Kaleina; The Archive, by Oscar winning director Ethan Spiglan; Zenith, by Vladan Nikolic; and the HBO short film, Betty La Flaca, by Hugo Perez. Asensio’s most significant theatrical role to date has been in the one-woman play, La Diva, by award winning playwright, Jeronimo Lopez Mozo, and which Asensio also translated to English, adapted and directed. La Diva has been performed in Europe, Africa and North America. Currently, Asensio is developing her first feature film as a writer/director which will be shot in New York City.

$10 suggested donation. Get your tickets online.