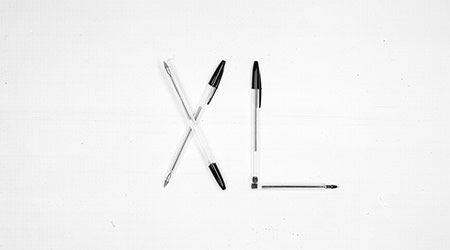 Uriarte’s practice takes its inspiration from his former career in business administration, employing standard office supplies such as ballpoint pens and highlighters to create geometrically patterned line drawings, paper constructions, and animations. Moving from strict to whimsical, these works clarify his relationship to the early Conceptualists and demonstrate how he has been influenced them. Uriarte’s art looks at the ways in which the information, skills, working conditions, and materials encountered in the workplace can become a source of influence and artistic inspiration.

Uriarte’s unique approach has resulted in a diverse body of drawing, at turns bold and subtle, that converts the repetitious nature of office work into vertiginous monochromes, geometric abstractions, and color studies. Quotidian office activities like speaking on a conference call while doodling on a notepad often inspire profound, artistic gestures.

For instance, in BIC Transitions (2010), Uriarte documents the act of scribbling, using disposable BIC pens to create dramatic colored ink fields on sixteen A4 sized sheets of paper. The drawing originates with four standard colors (black, blue, red and green) —the varieties suitable for office use— which the artist mixes via a system of thirds to form a vibrant palette of intersecting orbs. What Uriarte accomplishes with a utilitarian instrument are discrete movements that amount to works with monumental presence.

This exhibition will also include a new dolby-surround recording of the twelve main letters of a German typewriter (ASDFGHJKLÖ) read in a prayer-like mumble by Blixa Bargeld, the front man for the indie rock band, Einstürzende Neubauten. The vocal recitation of fricative letterhammering grants the obsolete typing machine a prominent place within an era of technological innovation. Shown together, Uriarte’s optically mesmeric compositions and audio works present the prescient dialogue between sound and image.

Uriarte, born in 1972 in Krefeld, Germany, lives and works in Berlin. He studied Business Administration at Europäische Wirtschaftsakademie in Madrid, Spain, and at Berufsakademie in Mannheim, Germany, from 1992 to 1995, and worked for major corporations including Siemens, Canon, Interlub, and Agilent Technologies. From 1999 to 2001, Uriarte studied Audiovisual Arts at the Centro de Artes Audiovisuales in Guadalajara, Mexico, prior to becoming a full-time artist.

Organized by The Drawing Center. Curated by Joanna Kleinberg Romanow, Assistant Curator. With the support of SpainCultureNewYork - Consulate General of Spain in New York.