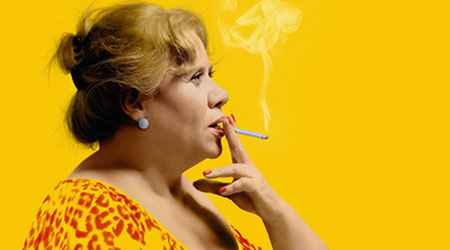 Paco León makes his feature film debut with Carmina or Blow Up, a project starring his real-life mother and sister.

Famous comedian Paco León drags us to the surreal and wild world of Carmina, a 58-year old woman who manages a bar with Iberian products in Sevilla.

Due to the lack of support from the insurance company following a series of robberies, Carmina has to find an alternative way of getting the money back to support her family. While she waits in her kitchen for her plan to develop, Carmina reflects on her life, deeds, and miracles.

A phenomenon in Spain, Carmina or Blow Up was the first film to be released simultaneously in theaters, DVD, pay TV, and the Internet in its country, reaching an astonishing 30,000 spectators in the first week. The film's charming and wild protagonist has not only seduced the audience, but the critics as well, taking the Special Jury Prize, Audience Award and best Actress Award at the Málaga Film Festival.

In Spanish with English subtitles. Doors open at 6:30 pm. Presentation and screening start at 6:45 pm. RSVP required. Get your free ticket.