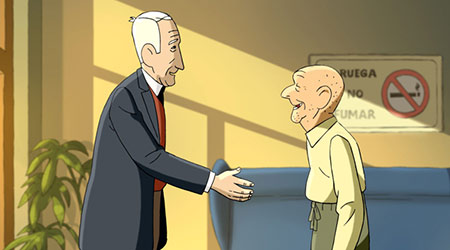 One of the most accomplished Spanish films, from any genre, of recent years.

It's funny, it's sad, it's sweet, it's heartbreaking. It's brilliant.

Based on Paco Roca's comic of the same title (2008 National Comic Prize), Wrinkles is a 2D animated, feature-length film for an adult audience. Wrinkles portray the friendship between Emilio and Miguel, two aged gentlemen shut away in a care home. Recently arrived Emilio, in the early stages of Alzheimer, is helped by Miguel and colleagues to avoid ending up on the feared top floor of the care home, also known as the lost causes or “assisted” floor. Their wild plan infuses their otherwise tedious day-to-day with humour and tenderness, because although for some their lives is coming to an end, for them it is just beginning.

Graphic novelist Paco Roca will be in attendance at both shows. In Spanish with English subtitles, not rated. Buy tickets online, watch trailer and view the full AFI European Union Film Showcase.