Special presentation of 'Aquí y allá' ('Here and there') 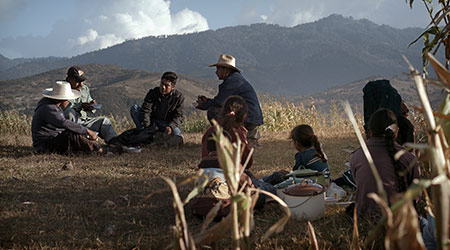 A quietly devastating exploration of the cruel paradox that, in order to feed their loved ones, emigrants have to leave them behind.

A most remarkable debut; rarely, if ever, has a film about US/Mexican border experience felt so fresh or authentic.

—The Film Society of Lincoln Center

After years of working odd jobs in the U.S., Pedro returns home to his mountain village in Guerrero, Mexico. But upon his return, he finds himself a stranger in his own home. His daughters are rebellious and distant, while his wife doesn't quite welcome him with open arms. He finds brief moments of joy playing with his band, the Copa Kings, but they don't last.

AFI Latin American Film Festival showcases the best filmmaking from Latin America and, with the inclusion of films from Spain and Portugal, celebrates Ibero-American cultural connections. This year's selection of 50 films makes it the biggest festival yet, and includes international festival favorites, award-winners, local box-office hits and debut works by promising new talents.

Buy tickets for Here and there. Special presentation by Director Antonio Méndez Esparza. Reception to follow.