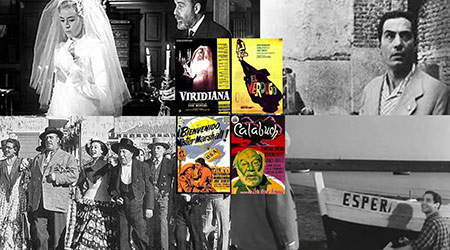 Bienvenido Mr Marshal
L. García Berlanga / 75 min. / Comedy / 1953. After finding out that North Americans are visiting their Spanish villages, the citizens of Villar del Río (Soria) start preparing themselves to welcome them when they arrive.
On September 26th

El verdugo
L. García Berlanga / 87 min. / Black Comedy / 1963. An undertaker gets married to an old executioner's daughter and, although he doesn't like it, he must continue the profession of his father-in-law after his retirement.
On October 24th

Viridiana
Luis Buñuel / 90 min. / Drama / 1961. Viridiana, a young nun about to take her final vows, pays a visit to her widowed uncle at the request of her Mother Superior.
On November 28th

Calabuch
L. García Berlanga / 92 min. / Comedy-Drama / 1956. A renown atomic scientist escapes from his world of formulas and destruction and finds a respite in a Spanish seaside village.
On December 19th

Organized by the Nilita Vientos Gastón Cultural Center, the General Consulate of Spain in Puerto Rico and the French Alliance of Puerto Rico. Free and open to the public.