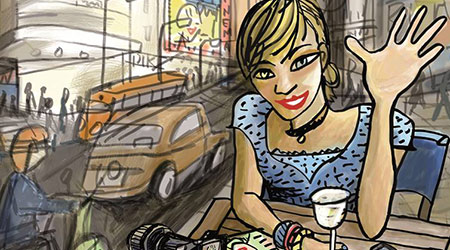 Join us for our 18th annual showcase of the wildest, sexiest new films from Spain —on the big screen at the Egyptian Theatre in Hollywood.

Since 1994, the Recent Spanish Cinema Series has been presenting the most outstanding current Spanish films. The Series is a Eighth Art showcase of Spain's top cinema personalities, who have contributed significantly to putting "Made in Spain" productions in the vanguard of international filmmaking.

The cover image for the 18th Recent Spanish Cinema series in Los Angeles is a painting by renowned artistic designer Javier Mariscal, who faithfully displays the optimism and vibrant colors characteristic of his work to create a scene for the film series in which a young and pretty Spanish actress greets the U.S. from a sidewalk café on Madrid’s Gran Vía, an emblematic avenue in the heart of the city, where many popular cinema theaters are clustered and where traditional and modern coexist.

Check the Recent Spanish Cinema and the American Cinematheque websites in October for more additions to the lineup. Tickets are on sale at the box office or online. Watch Promo.