'Once Upon a Time in Almería' 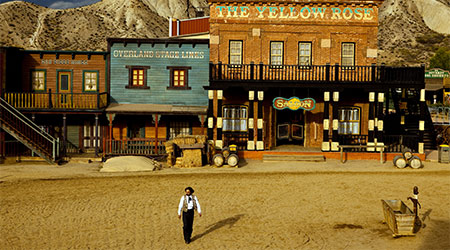 Exhibition of photographs by Mark Parascandola documenting a forgotten legacy of moviemaking in the desert landscapes of Almería.

During the 1960s and 1970s, the region of Almeria, Spain, was host to dozens of filmmakers who constructed elaborate movie sets, invoking locations from the American Southwest to Bedouin Arabia.

This series of photographs focuses on the architecture and locations used in classic films over the years. Some of the buildings shown were constructed solely as temporary sets, while others are pre-existing structures with their own history, discovered and reused by foreign movie directors. The prints on display are limited-edition digital prints made using archival pigment inks.

Mark Parascandola is a photographer based in Washington, D.C. A PhD epidemiologist by training, he uses photography to explore patterns of movement in human populations, focusing on architecture as evidence of often-invisible social, environmental, and economic processes.

Mark has family roots in the desert landscape of Almería, and he is currently documenting the remains of old movie sets constructed in the region during the 1960s and 1970s. His work has been featured at galleries in Washington, D.C. and in Spain and appears in the DC Art Bank and numerous individual collections. He is an active member of the Washington Project for the Arts and the Mid City Artists. Last year Mark was selected as a finalist for the 2011 Sondheim Prize and was exhibited at the Baltimore Museum of Art.