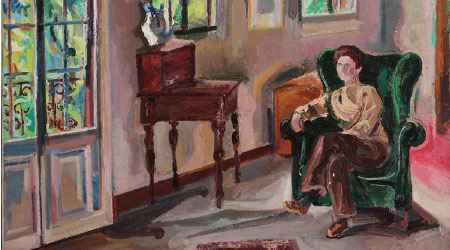 A woman who managed to find happiness in painting during the dark years after the Spanish Civil War.

Menchu Gal (Irún 1919–2008) was one of the few women creators that shone in a world led by men during the dark years following the Spanish Civil War. She was also the first woman who won the National Painting Award in Spain.

The spectator will connect with the warmth of her interiors and the smell of the salt in her sea landscapes —those exterior slices where you can feel the beat of life. The paintings of this Basque artist invite the observer to walk along with her, following her steps and drawing a map of shared affinities where each one can trace his or her own itinerary.

Another aspect that characterizes Menchu Gal’s work, beyond the influence of Cubism and Fauvism, is the feeling of proximity and positive energy. Through depictions of wine harvest, rooftops and sunsets, the artist introduces us to a fantasy world where everything’s possible.