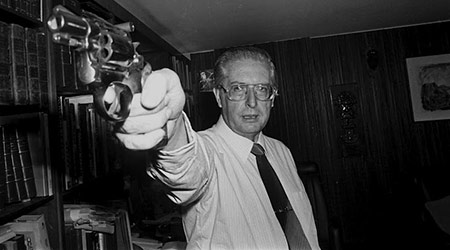 Óscar Pérez Medrano shows us the unforgettable images of his photographic work during five decades documenting the reality and stages of violence and overcome.

Oscar Pérez Medrano leads us to the cruel reality on the strength of the images taken in relation to events which occurred in Peru's history. During the 80s and 90s Peru confronted its internal violence and it recently has shifted to further justice, establishing an effective means for the integration of peace and respect for human rights.

The author shows us unforgettable images of his photographic work throughout five decades documenting the reality and stages of violence and overcome. The public will see a selection of impressive photos of destruction and death in the period of internal violence that affected the Peruvian people during this historical change, especially the Andean communities. This phase of violence occurred with the emergence of Sendero Luminoso. The intervention of the Peruvian government successfully managed to reduce this and other terrorist groups with the capture of its top leaders.

In this exhibit, the author shows some pictures of wives, mothers and daughters who suffered the loss of their loved ones, as well as orphaned children, members of self-defense committees (ronderos) that emerged during the years of political violence. The author went to places almost inaccessible in Peru after the terrorist attacks such as the towns of Lucanamarca and Huaychau. The image of the wounded face of Edmundo Camana Sumari, one of the seven survivors of the slaughter of Lucanamarca became famous for his photo with a bandaged head covering his eye.

Furthermore, the author picks the other side of the coin of Peruvian reality with uncommon images of its society, portraying villagers of the high Andean peaks and forest populations, innocent faces of children, the elderly descendants of ancient cultures that are far from technological advances and lifestyles, a sector of the new generation of children, adolescents and women of the jungle region. There are portraits of enraged people, images of social conflicts, Andean traditional celebrations and cultural events.

Curated by Roberto Bustamante F. Admission is free and open to the public.