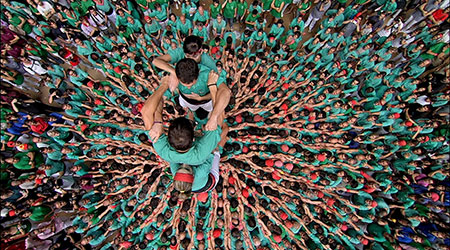 Screening of the 3D documentary film from TV3 on the world of human towers. Els Castellers de Vilafranca, one of the most important groups in Catalonia, will participate with a human tower.

Enxaneta, the 3D documentary film from TV3 – Televisió de Catalunya on the world of human towers, will be screened in New York on June 23rd at 10:30 am at the AMC Loews Lincoln Square 13 Theater in the Upper West Side.

The screening will coincide with a demonstration from Castellers de Vilafranca, one of the most important human tower groups in Catalonia. This group from Vilafranca del Penedès will participate in the presentation of Enxaneta, with performances before and after the screening of the film.

Enxaneta demonstrates the values that have made human towers an Intangible Heritage of Humanity by UNESCO; the spirit of surmounting, teamwork and the integration of people of all ages and all nationalities, with the aim of making it known around the world. Nominated during the previous Gaudí Awards in the category of best documentary film, this production premiered in Paris in September during a business meeting as an example of social cohesion and integration into Catalan society. Since then, television in Britain, Sweden, Finland, Slovenia, Austria, Jordan, Brazil and Mexico have been interested in the broadcast.

To attend the screening, please confirm attendance with Elisabet Ventura at