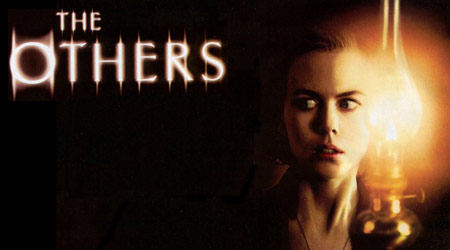 The Others is a psychological horror film by the Spanish director Alejandro Amenábar starring Nicole Kidman.

Amenábar reached his first commercial success in 1996 with Thesis, a film which undoubtedly showed that a major new director had arrived on the scene. Later, Abre Los Ojos and The Others confirmed his arrival in the cinematographic world.

In The Others, his first English-language movie, he shows an impressive mastery of the ghost-story form. He sends his camera down shadowy corridors and into cavernous rooms to create a mood of elegant dread.

A woman named Grace retires with her two children to a mansion on Jersey, towards the end of the Second World War, where she's waiting for her husband to come back from battle. The children have a disease which means they cannot be touched by direct sunlight without being hurt in some way. They will live alone there with oppressive, strange and almost religious rules, until she needs to hire a group of servants for them. Their arrival will accidentally begin to break the rules with unexpected consequences.

In English with Spanish subtitles. Free Admission. Limited seats. Get your free tickets for the screening. Rated PG-13 (Parents strongly cautioned; it has some intensely frightening scenes). Doors open at 6:30 pm; presentation and screening at 6:45 pm.