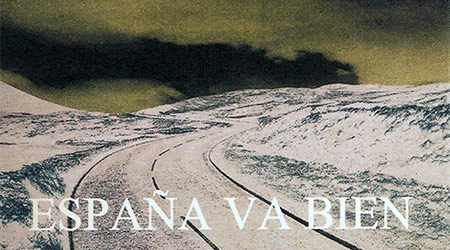 Muntadas: Eleven presents eleven works created in varying periods and under varying circumstances. This exhibition marks the first time these works have been seen in New York, beginning with the earliest, Diálogo, produced in 1980 in Madrid; to the series Sentences, begun in 1999; to Look/See/Perceive of 2009; to recent work like The Ordeal of Picasso's Heirs and Carteras sin ministro, both from 2012.

Although Muntadas is well known for constructing critiques of what he calls the "media landscape" in large and complex projects, each of these eleven works embody a particularly direct and personal engagement with issues of perception, interpretation, and representation.

Antoni Muntadas was an early pioneer of video and installation in the mid-seventies, and he has continued to work with photography, video, installation, audio recording, and urban intervention. Iterations of his iconic projects —such as Between the Frames: The Forum (1983-93), The Board Room (1985), and the ongoing series On Translation (1995- ) and The Construction of Fear (2008- )— have been widely exhibited at institutions and galleries in North and South America, Europe, and the Middle East.

Muntadas has received numerous honors, including awards from the Solomon R. Guggenheim Foundation, the Rockefeller Foundation, the National Endowment for the Arts, the New York State Council on the Arts, Arts Electronica in Linz, Laser d'Or in Locarno, and the Premi Nacional d'Arts Plàstiques de la Generalitat de Catalunya. In 2005 the Spanish Ministry of Culture awarded him the Premio Nacional de Artes Plásticas.

View online publication (PDF) documenting all of the works included in Eleven. Gallery Hours: Tuesday-Saturday, from 10 am to 6 pm.