Joan Miró: 'The Ladder of Escape' 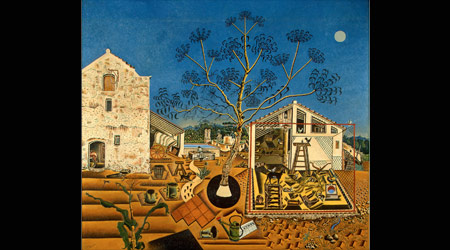 Celebrated as one of the greatest modern artists, Joan Miró (1893–1983) developed a visual language that reflected his vision and energy in a variety of styles across many media.

Joan Miró: The Ladder of Escape traces the arc of Miró's career while drawing out his political and cultural commitments.

The exhibition presents these themes through three principal periods: Miró's early work, rooted in the Catalan countryside, and then transformed under the influence of the surrealists in the 1920s; his artistic response to the Spanish Civil War (1936-1939), the fall of France, and life under fascist rule; and the artist's late work just before the demise of Francisco Franco's dictatorship in 1975.

Admission is free. View the calendar of events.

Organized by the Tate Modern, London, in collaboration with Fundació Joan Miró, Barcelona, and in association with the National Gallery of Art, Washington.

The exhibition is made possible through the generous support of the Anna-Maria and Stephen Kellen Foundation. Additional support is provided by Buffy and William Cafritz.The Institut Ramon Llull is an exhibition sponsor in Washington and London. This exhibition is supported by an indemnity from the Federal Council on the Arts and the Humanities.