Entomo: 'Where insects and humans come together' 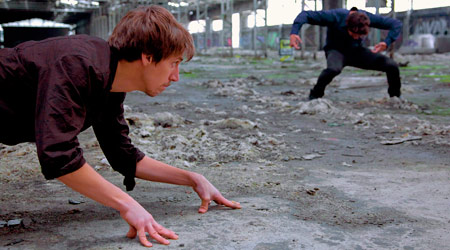 A duet where contemporary and urban dance mix their own technique to create an animal and insect movement.

The Kennedy Center presents Look Both Ways: Street Arts Across America, which offers free performances and events at the Kennedy Center as well as locations around Washington, including large-scale spectacles, street musicians, parade culture, puppetry, circus arts, chalk drawings, clowning, and more. From a circus-punk marching band and political puppet theater to jugglers, contortionists, and stunt dogs, the electric energy of live interactive performance invades the streets of Washington.

From Spain, EA&AE ElíasAguirre&Álvaro Esteban will offer three performances of their contemporary dance piece, Entomo: Where insects and humans come together.

Where insects and humans come together. Through a magnifying glass we observe two small creatures, and the microcosm that surrounds them. They may be humans; they may be insects. Territoriality, the conquest of spaces.

This 12-minute piece by the Spanish choreographic duet has won 1st prize at the Burgos-New York contest (Spain, 2010); 1st prize at the Ibero American Dance Contest Alicia Alonso (2010, Cuba) for the "maturity with which it was conceived […] by an original and daring duo that arouses many existential and philosophical implications in the audience." Entomo is also a recipient of Audience Prize and Superior Dance conservatory Proze at Madrid Contest (2009) and 3rd Prize at the Capturadanza dance-video contest (Madrid, 2010).

On May 12th at 4pm (outdoors performance)
At Yards Park, entrances at 3rd, 4th, and Water Streets, SE - Washington, D.C.

Organized by SPAIN arts & culture in collaboration with The John F. Kennedy Center for the Performing Arts.