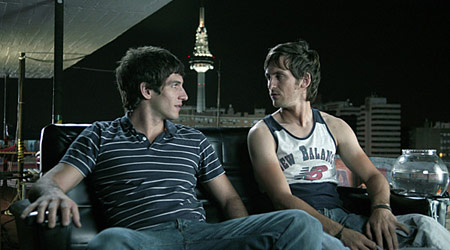 Screening of DarkBlueAlmostBlack with director Daniel Sánchez Arévalo in attendance.

When his father suffers a debilitating stroke, Jorge is forced to put his life and career on hold. He takes over his father's janitorial position, cares for his father and studies at night. His life is further complicated by romantic entanglements with women. Meanwhile, Jorge's best friend Israel begins to question his sexuality and his family's integrity when he discovers that his father frequents a male masseur.

Director Daniel Sánchez Arévalo's tender and witty debut examines the feeling of entrapment that arises when needs and desires are subjugated to family obligations. It is also an astute exploration of generational politics in Spain, where the young are generally expected to carry on traditions and values.

In Spanish with English Subtitles. Free Admission. Limited seats. Get your free tickets for the screening.