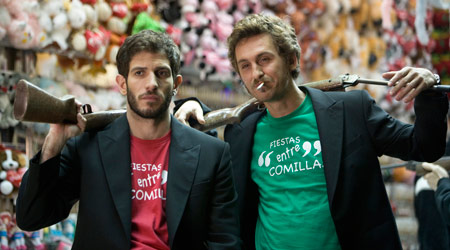 Spanish comedy Primos (Cousinhood, Spain, 2012, 98 minutes, 35mm, color) by filmmaker Daniel Sánchez Arévalo will be featured this year in the section The Lighter Side – Politics Isn't The Only Funny Thing in Washington!

Cousinhood is a raucous, edgy, and surprisingly human romantic comedy that focuses on men and their vulnerabilities.

When handsome, 20-something Diego gets dumped by his fiancée a few days before his wedding, his immature best friends, playboy Julian and henpecked Jose Miguel, step up cheer him up. They take him on a road trip to a seaside town to reconnect with Martina, his first love, but she is now a single mom and the three friends suddenly have to deal with grown-up situations, often with hilarious results. As José Miguel develops a sweet, paternal bound with Martina's little boy, Diego tries to come to grips with strong but conflicted feelings for Martina.

Daniel Sánchez Arévalo is one of Spain's most popular and respected directors. Here he delivers his trademark brand of raunchy, perfectly timed comedy rooted in rich and fully developed characters and storylines.