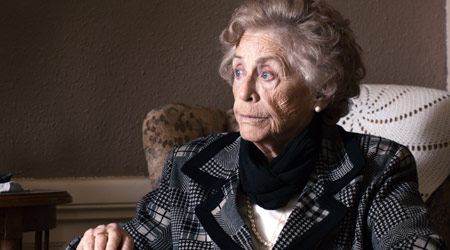 Basque comedy Urte berri on amona! (Happy New Year, Grandma!) by filmmaker Telmo Esnal (Spain, 2011, 107 minutes, digital, Color) will be featured this year in the section The Lighter Side – Politics Isn't The Only Funny Thing in Washington.

In this hilarious black comedy, Maritxu (Kontxu Odriozola) a harried and highly strung Basque woman, is becoming exhausted by the demands of her elderly mother Mari. Maritxu won't hear of putting her in a nursing home, so her husband takes his wife on a vacation and conspires to have his daughter Miren (Nagore Aramburu) and son-in-law Kintxo (Pedro Otaegi) take Mari to the nursing home.

The plan backfires when Mari runs away. Kintxo tracks her down at a luxury hotel and has to take her into his home. The old lady is a terror, manipulative and vindictive, so he starts to consider a drastic solution.

With a superb ensemble cast, Esnal creates a world populated with beautifully rendered, realistic characters increasingly driven to despair by the conniving grandma played with quiet —and not so quiet— ferocity by Monstserrat Carulla.