'Draw what you think:' a collection of cartoons by El Roto and Jeff Danziger 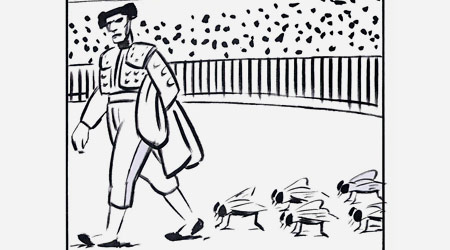 The first exhibition of the contemporary cartoonist Andrés Rábago (known as El Roto) in Chicago.

His cartoons, characterized by a lucid and trenchant critique of society, appear in the Spanish newspaper El País, as well as in the insert of the International Herald Tribune sold at Spanish newsstands.

In addition to the twenty-four drawings by El Roto, this exhibition will also include 16 panels by American political cartoonist, Jeff Danziger, whose work appears daily on The New York Times Web Site, The Huffington Post, and the National Memo. Jeff Danziger's work has also appeared in The Wall Street Journal, Forbes, The New Yorker, The International Herald Tribune, Le Monde and the Moscow Times.