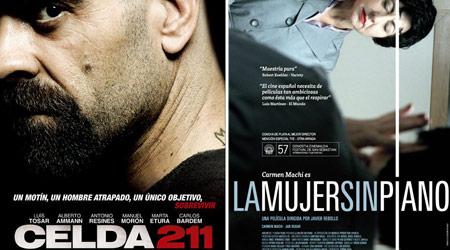 Cell 211, Shame, The Condemned, and Woman without Piano participate at the Film Showcase organized by the Ibero-American Cultural Attachés Association.

The best of recent Spanish cinema takes part of the 2012 edition of the Ibero-American Film Showcase. A selection of 4 films will be screened at the Embassy of Spain, Friday 17th and Saturday 18th.

Full Schedule of Spanish Films at the 2012 Ibero-American Fim Showcase:

La Mujer Sin Piano (Woman without Piano)
On Friday, February 17th at 6:30 pm
Spain, drama, 2009, 94 minutes, directed by Javier Rebollo, who won the Best Director award at the 2009 San Sebastian Film Festival. In Spanish with English subtitles.
Woman without piano is the portrait of an anonymous housewife at the turn of the XXI century in Madrid. For her, nothing compares to the intimate satisfaction of watching a piping hot dish served, on time, for lunch. The movie shows 24 hours in her domestic, professional and sexual everyday life —a life she flees from one night. The film is the tale of what happens during that night. Some might say this movie reflects the alienation of a housewife, but the story is really about a woman on the brink of menopause, a woman with no friends and no social life. She has devoted her life to her family, she doesn’t think she is pretty, she hates her hair… and just slips into the strangeness of the night. Because when night falls, a fun, dark and absurd new world rises.
View trailer

Los Condenados (The Condemned)
On Friday, February 17th at 8:30 pm
Spain, drama, 2009, directed by Isaki Lacuesta. In Spanish with English subtitles. FIPRESCI-Critics Award at the 2009 San Sebastian Film Festival.
Two ex-guerrillas who reunite at an illegal excavation site to look for the body of a third colleague who disappeared 30 years ago. But they are no longer the same people they used to be. The tension builds and secrets kept for so long gradually come to light as they progress in the search for their friend.
View trailer

La Vergüenza (Shame)
On Saturday, February 18th at 4:00 pm
Spain, drama, 2009, 107 minutes, directed by David Planell. In Spanish with English subtitles. Best Feature Film and Screenplay at the 2009 Málaga Spanish Film Festival.
Pepe and Lucia can’t do anything with Manu. They have tried everything, but it is useless: the child they adopted barely a year ago it just too much for them and they have decided to send him back. However, they soon realize the price they will have to pay if they go on with their plan.
View trailer

Celda 211 (Cell 211)
On Saturday, February 18th at 6:30 pm
Spain, thriller, 2009, 113 minutes, directed by Daniel Monzón. In Spanish with English subtitles.
A novice prison official has the back luck of starting a new job on the same day the prisoners organize a mutiny. Entangled by the capricious and tragic circumstances, he must make the most of his own greatest resource: his intelligence. Discovering e is far from the shy, weak an even good man he has long considered himself, he finds he is a born survivor on the edge of an abyss. Goya Award for Best Feature Film 2010.
View trailer

All films In Spanish with English subtitles. RSVP required for all films. Please indicate showtime and number of guests:

Organized by Ibero-American Cultural Attachés Association. With the support of Filmoteca MAEC-AECID.